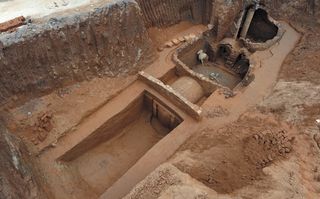 About 1,800 years ago, at a time when China was breaking apart into three warring kingdoms, a warrior was laid to rest.

Buried in a tomb with domed roofs, along with his wife, he was about 45 years old when he died. Their skeletal remains were found inside two wooden coffins that had rotted away. Archaeologists don't know their names but, based on the tomb design and grave goods, they believe he was a general who had served one or more of the country's warring lords, perhaps Cao Cao and his son Cao Pi.

His tomb was discovered in Xiangyang, a city that, in the time of the Three Kingdoms, was of great strategic importance. Rescue excavations started in October 2008 and now the discovery is detailed in the most recent edition of the journal Chinese Archaeology. (The report had appeared earlier, in Chinese, in the journal Wenwu.)

The rescue operation, carried out by the Xiangyang Municipal Institute of Cultural Relics and Archaeology, uncovered many treasures in the tomb. One of the biggest finds was a life-size bronze horse, the largest ever found in China.It measures 5.3 feet long and by 5.3 feet tall (163 cm by 163 cm). "The horse figurine is in standing posture, has erected ears, protruded eyes, opened mouth, long and broad neck, upright mane and drooped tail," writes archaeologist Liu Jiangsheng. [Photos of Three Kingdoms' Tomb & Grave Goods]

The tomb also held a highly detailed glazed pottery model of a two-story mansion surrounded by an enclosing wall with a gateway. The gate has two main doors, each decorated with a door knocker ring and two "feathered" human figurines. Bear motifs were found in many decorations on the house.

Pottery houses like these are well known from the preceding Han Dynasty, although detailed multi-story houses are rare. Architect Qinghua Guo, a professor at the University of Melbourne, writes that models like these are helpful in reconstructing what houses in ancient China may have looked like.

"Literary descriptions of the buildings of ancient China lead us to believe that it (had) a highly developed architecture, but actual remains are rare and fragmentary," Guo writes in the book "The Mingqi Pottery Buildings of Han Dynasty China 206 B.C. – A.D. 220" (Sussex Academic Press, 2010). "The images of those perished buildings were not totally lost, surviving as miniature models in ancient tombs."

The treasures found in this tomb go on and on, gold and silver disks, crystal and agate beads, gold bracelets, just to name a few.

Among the finds is a jade pig figurine, his snout finely detailed, the tiny animal having apparently gone to sleep. Another work of art shows a glazed pottery figurine of a dog barking furiously while standing on all fours.

Yet another piece shows a beastly tomb guardian, his long tongue sticking out and, grossly enough, "a crawling animal is attached onto the tip of the tongue," Jiangsheng writes. [10 Weird Ways We Deal With the Dead]

A bronze mirror was found with a round knob in the center. The mirror is decorated with elaborate patterns that include depictions of the phoenix and even a kui, or a one-legged demon. Two inscriptions were found on the artifact, one reads (in translation) "To benefit the Descendents Forever," while another reads, "May the Holder Get the Position of the Three Dukes." The Three Dukes were the three most powerful officials, below the emperor, in ancient China.

Like any good warrior, the general made sure he was well equipped for the afterlife. Bronze and iron sabers were found in the tomb along with a bronze crossbow trigger still, after 1,800 years, in good condition.

The Three Kingdoms period is one of the most celebrated periods of Chinese history. It saw the end of the 400-year-long Han Dynasty and the emergence of the kingdoms of Wei, Wu and Shu.

There are frequent references to it in popular culture. A 14th-century historical novel called "Romance of the Three Kingdoms" is considered one of the most popular works ever written in Chinese. Also movies like "Red Cliff" and a series of video games produced by Koei have brought this period further attention in both China and the West.

While researchers do not know who this general was, or who he fought for, they believe from the artifacts and architecture found that he was laid to rest early in the Three Kingdoms period, which formally started in A.D. 220. Furthermore accounts by historians indicate that Xiangyang where he was buried occupied a strategic area that allowed armies access between northern and southern parts of the country.

Toward the end of the Han Dynasty the city was controlled by Liu Biao, technically a governor of Jing Province, although in practice he was independent of the Han court. He held onto the city until his death in A.D. 208, after which the armies of Cao Cao approached the city and the governorship was surrendered. Cao Cao would then use the city as a base for his drive south, a campaign that would end in his defeat at the hands of Liu Bei and Sun Quan at the Battle of Red Cliffs.

Even after the defeat the city of Xiangyang remained in Cao Cao's hands although an attempt to take it was made in AD 219 by Guan Yu, a Chinese general still revered today.

In A.D. 220 Cao Cao died and was succeeded by his son Cao Pi, who proclaimed himself emperor although his forces did not control the whole country. The fighting between the three kingdoms would go on for several decades more and long after Cao Pi's early death in A.D. 226.

Yet throughout Cao Pi's rule Xiangyang appears to have remained in his hands, leaving open the possibility that the general buried in the newly discovered tomb was one of his retainers, allowed to have a grand tomb, with treasures, for the afterlife.