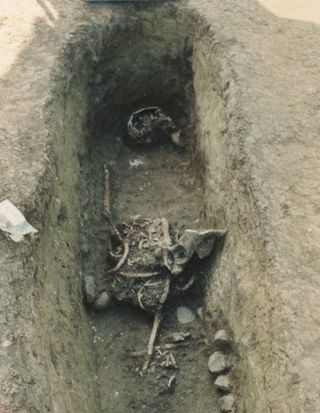 When this grave, in the Austrian medieval cemetery Brunn am Gebirge, was excavated, the jumbled bones of the corpse revealed that someone else had beat the excavators to it and had opened it up to rummage around inside. While this scenario may call to mind grave robbers, one archeologist suspects that the people who opened graves like this one weren't re-opening to uncover to loot.
(Image: © Peter Stadler, Department of Prehistory, Museum of Natural History Vienna)

Once laid to rest, the remains of many who died in medieval Europe were not left in peace. As much as 40 percent of graves from the mid-fifth to mid-eighth centuries appear to have been disturbed after burial.

Grave robbers, searching for wealth buried along with the dead, have frequently born the blame from archaeologists.

"This sort of behavior has always been described as grave robbery," said Edeltraud Aspöck, a postdoctoral researcher at the Austrian Academy of Sciences. "It has always been thought that it was criminal gangs and foreigners that have been plundering, and it was all about material gain."

For instance, in a sixth-century Austria cemetery, only certain types of objects appear to have been taken, and there's a pattern to how the excavated bodies were handled, indicating that more than mere plundering was occuring. And in a slightly more recent English cemetery, some corpses were discovered with their bodies placed in strange poses — possibly the work of people who reopened their graves to ease the restless souls, Aspöck suggests.

Excavators know a grave has been re-opened when they see the outlines of another pit, often with a darker colored soil, in the area of the original grave. Sometimes, they find other clues in the upper layers of soil above the grave, such as pieces of bone, ceramic or snail shells. Fine sediment accumulated in the bottom of the grave indicates that the grave was left open, allowing the elements to slowly refill the hole.

The corpses themselves also can provide clues, however, these can be tricky to interpret.

The arrangement of the bones can indicate how far along decomposition had progressed when the grave was reopened, Aspöck writes in an article published recently in the Oxford Journal of Archaeology. Shortly after burial, while the bones are still held together by tendons, tissue and clothing, the body can be shifted around without falling into pieces. As decomposition proceeds, and these connections disintegrate, parts of the corpse will fall away if the body gets moved, and some bones will scatter.

And so, it's important to be cautious when looking for signs of human meddling, according to Aspöck, because natural decay processes — the release of gases, soil pressure, the collapse of the body, the arrival of small animals — can also dislocate bones.

Brunn am Gebirge, a sixth-century cemetery in Austria left by a Germanic tribe called the Langobards, contains 42 graves that all, with only one possible exception, appear to have had intrusive visitors after the burial. In fact, some of the graves look as if someone used a tool to rummage around in the coffin, leaving a mix of loose bones.

Rather than grave robbers, she suspects the Langobards themselves.

"Some researchers say in early medieval periods the cemetery may have been a place to play power games, to display the dead with very rich grave goods. It may have been an important factor when families or clans are competing with each other," Aspöck said.

In Brunn am Gebirge, excavators found loose garnets believed to have once been set in a brooch taken from the grave, and loose silver and bronze rings thought to have belonged to a girdle hanger, a symbolic object probably worn from a woman's belt.

"I think the grave goods didn't have only material value, I think they had a strong symbolic value that it was part of the identity of the people," she said, speculating that when the Langobards moved out of the area in the mid-sixth century, they may have retrieved certain items for keepsakes of those deceased individuals.

The ways in which the bodies were manipulated are also telling. In particular, strange things were done with the skulls, which was the most frequently missing part of the body. A high proportion — more than a third — of graves re-opened after the corpse had decomposed to clean bone were missing the skull. And two graves, where bodies were most likely not fully decomposed when they were reopened, contained two skulls each. The extra skulls appeared to have been deposited when the grave was reopened.

The gravediggers may have removed skulls from the decomposed corpses to prevent the dead from returning, or becoming angry. It's also possible that the skulls were kept as relics by the Langobards when they moved on, she writes in the research article.

It's not clear why a second head was placed in two of the graves.

In general, graves with fully decomposed bodies at the time of re-opening appear to have been subject to the most destructive searches, and were less likely to have been filled in afterward.

This indicates that the gravediggers didn't want to disturb freshly decomposing bodies, reasoning that once decomposition had proceeded to leave just bones behind, the rummaging wouldn't interfere with a dead person's passage into their next life, according to Aspöck.

A second cemetery, Winnall II in southern England, dates to the mid-seventh to early eighth centuries and contains 45 graves. Because no robbing pits were visible and all but two of the skeletons were uncovered with their bones largely "in place," researchers did not suspect any post-burial disturbances.

But on reviewing the records, Aspöck saw some similarities with the disturbed graves of Brunn am Gebirge, including snail shells in the upper layers of soil, dislocations of individual bones, and the presence of foreign bones.

Some bodies at Winnall II were uncovered with their bodies strangely altered — their legs bent or twisted, feet tied, heads decapitated, or arms placed in front of the head. Originally, excavators assumed these bodies were buried this way. However, Aspöck found that these graves tended to show stronger evidence of reopening, which she thinks may have occurred in order to manipulate the bodies.

She suspects that perhaps something had happened to cause the living to suspect that the dead were restless — perhaps causing bad luck. By manipulating the bodies, the living hoped to confine the dead to their graves. Since, it wasn't customary for people in this time and place to bury many material possessions with their dead, it's unlikely the gravediggers were after wealth.

She cautions that the evidence at many individual graves at Winnall II doesn't point decisively to them being re-opened or left untouched for centuries. But, in general, the possibility that graves were reopened needs to be taken into account more seriously when medieval graves are analyzed, she said.