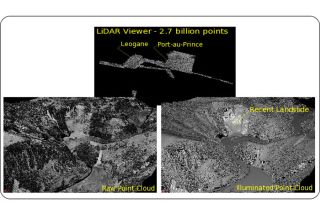 Lidar data shows the effects of the 2010 Haiti earthquake. The data was used to create a virtual reality environment of the quake damage in a study detailed online June 26, 2012 in the journal Geosphere
(Image: © UC Davis KeckCAVES)

Soon after the magnitude 7.0 earthquake hit Haiti in 2010, virtual reality helped scientists analyze the temblor, revealing key details about the roots of the disaster.

The catastrophic earthquake killed more than 200,000 people, nearly demolished the capital city of Port-au-Prince and left more than 1.5 million people homeless. Damages from the quake were estimated at about $8 billion.

To learn more about how the quake disrupted Haiti, scientists rapidly scanned the surface of the area after the calamity using lasers from the air. This method, called lidar, involved beaming thousands of pulses of light per second downward and measuring how long it took each pulse to reflect back, allowing researchers to compute the distance between the scanner and the ground and create a precise 3D map of a region about 330 square miles (850 square kilometers) in size. This was the first time such a large-footprint lidar survey took place within a few weeks after a major earthquake.

The 67 gigabytes of terrain data that the lidar survey collected enabled a team of geologists and computer scientists to remotely visualize the site in great detail. This helped them conduct "virtual fieldwork" there right after the disaster, using both a four-sided immersive virtual-reality environment and desktop computers.

The lead software developer was Tony Bernardin, who was in Haiti visiting his family when the earthquake happened. "Tony did massive amounts of work to develop his virtual globe software so that it could support the remote mapping functionality that I and other geologists on the team needed to execute the study," said researcher Eric Cowgill, a structural geologist at the Keck Center for Active Visualization in the Earth Sciences (KeckCAVES) at the University of California, Davis. "Other team participants played essential roles in finding and processing data, developing and testing software, making observations and developing ideas."

Scientists focused on an approximately 45-mile (75 km) section of the eastern Enriquillo-Plantain Garden fault spanning the epicenter of the quake. Based on their virtual fieldwork, the researchers suggest the 2010 event occurred within a "stepover," a place where the ends of two faults approach each other but do not connect — in this case, two separate sections of the Enriquillo-Plantain Garden fault. [Images from the Haiti Earthquake]

If the quake happened within this stepover, this could explain the lack of surface rupture seen after the event. "Deformation within the stepover is expected to be complex, occurring on multiple secondary faults that are generally shorter than the main segments outside the stepover," Cowgill said. "Because of their shorter length, the faults in the stepover can produce smaller earthquakes with ruptures that do not break to the surface, in contrast to the adjacent faults."

This research suggests more work is needed within the stepover region to better understand any faults there that could serve as potential sources of earthquakes. In addition, if the disaster was a relatively small rupture within a stepover, the adjacent segments of the Enriquillo-Plantain Garden fault may still be capable of deadly activity.

"In particular, we found that the fault segment to the east of the stepover and south of Port-au-Prince shows a history of past surface rupture," Cowgill said. "The segment appears capable of producing earthquakes similar in size to, or larger than, the 2010 event."

Overall, these findings, detailed online June 26 in the journal Geosphere,suggest "virtual-reality based visualization is likely to play an increasingly important role in the rapid scientific response to future natural disasters because it enables many basic aspects of fieldwork to be done remotely and more quickly than in the field," Cowgill said.

For instance, areas hit by natural disasters are often difficult to get to, due to rugged terrain, rough weather or lack of roads or aircraft availability. Virtual fieldwork can permit large numbers of researchers to examine a site remotely and quickly without diverting resources away from humanitarian efforts. This helps enable a rapid scientific response that can catch short-lived features such as unstable escarpments that can appear after quakes, which can help scientists better understand where and how faults ruptured and how earthquakes were generated.

"Such observations can also help researchers evaluate the potential for elevated risk of rupture on other nearby faults," Cowgill said. For example, examining tire tracks on roads can shed light on how the surface shifted, details potentially important for models that evaluate how stress fields around faults have changed following earthquakes to potentially move nearby faults closer to failure.

Virtual fieldwork can freeon-site researchers "to focus on making observations that only they can make," Cowgill said. "Boots-on-the-ground observations are essential for a complete picture of fault rupture," such as analysis of soil and rock types and dating of materials.