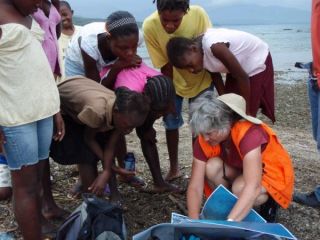 Carol Prentice, study team member with the USGS, explains observations made by her team of geologists to children near Beloc, Haiti who experienced the 2010 earthquake firsthand. The geologists visited Haiti in February and March 2010 to measure surface deformation caused by the Magnitude 7.0 Leogane earthquake.
(Image: © Dr Rich Briggs, USGS)

When a massive earthquake devastated Haiti one year ago, scientists initially blamed a well-known fault in the region, but were surprised to learn in subsequent study that a completely different and previously unknown fault caused the destructive temblor.

In the year since the quake, increased study and a better seismology presence in Haiti has led to a clearer picture of how exactly this quake was triggered.

The Haiti quake was a magnitude-7.0 temblor that ruptured on Jan. 12, 2010. It killed more than 200,000 people and left more than 1.5 million homeless. The damage was estimated at about $8 billion, according to Munich Re, the world's largest insurer. [Looking Back: Images from the Haiti Earthquake .]

About 75 percent of the global natural disaster death toll for 2010 was from the Haiti earthquake.

Scientists thought there was little doubt about the cause of the quake, said geophysicist Eric Calais of Purdue University at the American Geophysical Union's Meeting of the Americas conference this past summer in Brazil. The well-known Enriquillo fault was quickly blamed, but new data revealed a more complicated picture.

"The fault responsible for the earthquake was not the Enriquillo fault, but it was a new fault," Calais said. "This was such a big surprise that I thought all our calculations were wrong."

Scientists now know that about 85 percent of the energy from the earthquake came from that previously unknown fault, which is now called the Léogâne fault.

Earthquakes typically occur along faults, cracks in the rocky plates of the Earth's crust. A 25-mile-long (40 kilometers) fault segment ruptured during the Haiti earthquake.

The plates that make up the Earth's crust move relative to one another, most of the time at an imperceptibly slow pace on average plates move between 0.4 and 4 inches (1 and 10 centimeters) per year, which is about as fast as fingernails grow. The Enriquillo fault that runs right through Haiti is situated along the boundary between the Caribbean and North American plates. These plates slide past one another in an east-west direction, called a strike-slip boundary a vertical fracture where the slabs have mostly moved horizontally.

A research team led by Gavin Hayes, a geophysicist with the USGS in Golden, Colo., and Synergetics Inc. in Fort Collins, Colo., found, however, that some of the faults in the area were moving in unexpected directions. The earthquake actually occurred at the boundary of the Caribbean plate and the Gonave microplate, which sits between the North American and Caribbean plates. Here, numerous faults slipped, including a relatively small slip at the originally blamed Enriquillo fault.

When the quake ruptured, the Hotel Montana, a four-star resort in Haiti, came crashing down. That should not have happened. The hotel had been sturdily built on presumably solid ground.

"It was a surprise," said Susan Hough, of the U.S. Geological Survey (USGS) in Pasadena, Calif., who studied the Haiti earthquake "It's a ridge in an affluent part of the city, and it really got hammered."

Scientists later discovered that the earthquake's energy spread in an unusual way it was significantly amplified along this mountain ridge, causing substantial structural damage. This finding should lead to a better understanding of how topography amplifies an earthquake's energy, which is important as Haiti rebuilds.

Just as surprising as the complexities of the quake is that it triggered several small tsunamis.

"What's strange and Haiti is a good example is that from a technical perspective, this shouldn't happen," said Matthew Hornbach, a geophysicist at the University of Texas in Austin.

Strike-slip fault systems, such as the one that runs through Haiti, are not usually associated with tsunamis. Usually, a fault that moves up and down will move the seafloor and produce massive waves; strike-slip fault systems slide side-to-side when two plates butt heads. The Haiti quake, however, triggered massive underwater landslides that, along with a small amount of ground motion, made the waves, Hornbach said.

Globally, 3 percent of tsunamis are caused by slides. In Haiti, slide-triggered tsunamis may be 30 percent more frequent, Hornbach said.

The country's coastal setting, massive deforestation, high sedimentation due to extreme wet and dry seasons dumping material down the mountain, and infrequent earthquakes that would release the coastal build-up of sediment are all causes of the slides. These unstable coasts could set off tsunamis even during smaller earthquakes.

"All of sudden, tsunami warning systems can't account for these events," Hornbach said. "This makes it much more difficult to predict."

The Enriquillo-Plantain Garden fault zone (EPGFZ) has not produced a major earthquake in recent decades, but it is the likely source of historical large earthquakes in Haiti in 1860, 1770 and 1751, though none of these have been confirmed in the field as associated with this fault.

Because much of the energy for the Haiti earthquake was from the Léogâne fault, enough energy remains stored underground to unleash an earthquake that is even larger, Hayes said.

"We can't ever predict an earthquake," Hayes told OurAmazingPlanet. "But we can use this for hazard assessment and say this region has a high likelihood of a large earthquake, and plan for whatever we're building in this region."