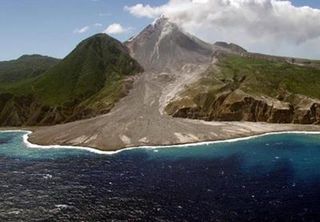 This is an aerial view of the Soufriere Hills volcano on the island of Montserrat in the Lesser Antilles. The photograph was shows one of the volcanic domes that grew and then collapsed into the sea since the volcano became active in 1995. However, there have been far bigger collapse events in the distant past that involve the entire volcanic edifice.
(Image: © NOC.)

Huge volcano-triggered landslides can alter the seabed when they tumble into the ocean and sweep across the sea floor. Now scientists are studying these effects by braving an active volcano.

A scientific team led by Peter Talling of the UK's National Oceanography Centre (NOC) is currently aboard the Royal Research Ship James Cook to map extremely large landslide deposits that cover a large area offshore from the Soufriere Hills volcano on Montserrat in the Lesser Antilles.

Thousands of years ago, a large collapse of the Soufriere Hills' edifice sent landslides into the ocean. Some of these landslides involved nearly 1.2 cubic miles (5 cubic kilometers) of material that travelled underwater for miles. However, a complete survey of such a deposit has never been produced.

"We plan to produce the first detailed survey of this type of volcanic flank collapse deposit," Talling said. "For the first time, we will image flank-collapse deposits by collecting three-dimensional seismic reflection data, which will show how huge avalanches were emplaced."

The researchers want to learn if volcano-triggered landslides that violently impact the seafloor can trigger even larger-scale failure of the underlying seafloor sediment. They also want to understand the frequency and triggers of these huge landslides and the size and frequency of tsunamis that they could potentially generate.

Sonar images show 130-foot (40-meter) tall blocks of material scattered across the seafloor circling the island. The research team will finish mapping the flank collapse deposits over the next two weeks.

The map will serve as preliminary data for the International Ocean Drilling Program, which aims to date the landslides by drilling into and recovering landslide material. By dating the material, researchers can associate it with historical eruptions or other changes in volcano behavior.

Ironically, the recent eruption of the Eyjafjallajökull volcano in Iceland — whose ash cloud has repeatedly delayed air travel across Europe —threatened the study of the Montserrat volcano by nearly stopping the researchers from flying out to the Caribbean in time to join the vessel.