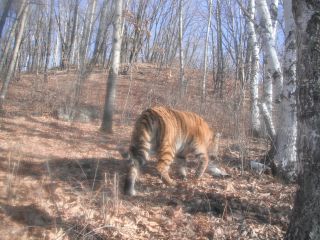 Photos of the endangered Amur, or Siberian tiger, have been taken for the first time by a camera trap in a nature reserve in northeast China, suggesting that the cats are expanding their range south from Russia where they are more plentiful.

The two photos were taken in April in the Wangqing Nature Reserve in northeast China's Changbai Mountains. The tiger likely came from Hunchun, close to the Russian border, where multiple images of Siberian tigers were taken in March. Several Amur leopards, which are even more endangered, were also spotted at that time in the Hunchun reserve.

Although footprints of the Amur tiger have been discovered many times in the Wangqing area since 2008, this is the first time that a camera trap set up in the reserve has captured photos of the rare species. Experts will try to identify the individual tiger photographed by comparing it with the Hunchun photos, according to a statement from the conservation organization WWF, which helped set up the cameras.

"The photos give hope of the real possibility that tigers could return to their previous habitat if steps are taken to manage it," said Zhu Jiang, head of WWF-China's Northeast Program Office, in the statement. "It shows that the camera trap is a very effective tool in monitoring rare wildlife species. We have to expand its use."

The WWF and other groups are working together to set up automatic infrared cameras to build the monitoring platform to cover areas of Amur tiger habitat elsewhere in the Changbai and nearby Wanda mountains.

"Data collected through this technology will help greatly in monitoring the Amur tiger population and its distribution," said Jiang Jinsong, Jilin Forestry Department's tiger and leopard program officer. "It would also help us determine whether there are settled individuals or breeding families, and therefore support conservation measures."

Amur tigers were once widespread in northeast China, but have declined due to habitat degradation and fragmentation, poaching and a small prey base. Estimates put the current wild Amur tiger population in northeast China, mostly confined to the Changbai Mountains in Jilin province and the Wanda mountains in Heilongjian province, at about 18 to 24 individuals. About 430 to 500 live in the forests to the north in Russia.