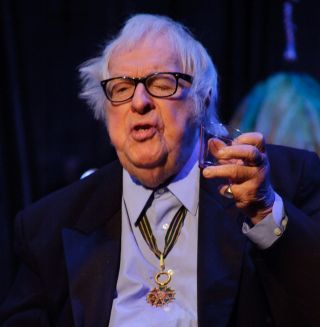 Ray Bradbury, known for his imaginative and evocative tales of Martian lands and sinister carnival characters, died Tuesday (June 5) at the age of 91.

During his lengthy career as a sci-fi writer, Bradbury mused on death (and life) at length, even citing his inspiration for writing as a desire to live forever.

Here are some of Bradbury's most provocative thoughts on dying.

1. Writing as the protagonist's dying grandmother in his 1957 novel "Dandelion Wine":

"Important thing is not the me that's lying here, but the me that's sitting on the edge of the bed looking back at me, and the me that's downstairs cooking supper, or out in the garage under the car, or in the library reading. All the new parts, they count. I'm not really dying today. No person ever died that had a family."

2. In "Something Wicked This Way Comes," his 1962 novel about an evil traveling carnival:

"The father hesitated only a moment. He felt the vague pain in his chest. If I run, he thought, what will happen? Is Death important? No. Everything that happens before Death is what counts. And we've done fine tonight. Even Death can't spoil it."

"Death doesn't exist. It never did, it never will. But we've drawn so many pictures of it, so many years, trying to pin it down, comprehend it, we've got to thinking of it as an entity, strangely alive and greedy. All it is, however, is a stopped watch, a loss, an end, a darkness. Nothing."

"Everyone must leave something behind when he dies, my grandfather said. A child or a book or a painting or a house or a wall built or a pair of shoes made. Or a garden planted. Something your hand touched some way so your soul has somewhere to go when you die, and when people look at that tree or that flower you planted, you're there. [A Gallery of Death in Art]

It doesn't matter what you do, he said, so long as you change something from the way it was before you touched it into something that's like you after you take your hands away. The difference between the man who just cuts lawns and a real gardener is in the touching, he said. The lawn-cutter might just as well not have been there at all; the gardener will be there a lifetime."

4. On his website, raybradbury.com, in December 2001, describing a childhood encounter with a carnival magician named Mr. Electrico. The experience inspired Bradbury to begin writing every day:

"Mr. Electrico was a fantastic creator of marvels. He sat in his electric chair every night and was electrocuted in front of all the people, young and old, of Waukegan, Illinois. When the electricity surged through his body he raised a sword and knighted all the kids sitting in the front row below his platform. I had been to see Mr. Electrico the night before. When he reached me, he pointed his sword at my head and touched my brow. The electricity rushed down the sword, inside my skull, made my hair stand up and sparks fly out of my ears. He then shouted at me, 'Live forever!' I thought that was a wonderful idea, but how did you do it?" [Top 10 Immortals]

"I want everybody listening to me to think of Mars, only Mars, again and again and again. And think of going back to the moon and make sure the government hears this from you. These are bad times today. If you read the Wall Street Journal, forget it! You know? If you buy stocks sell 'em! Get rid of 'em! But listen to me and say, 'Back to the Moon!' The moon is everything and Mars is beyond, waiting for us. I want to be buried on Mars. I don't want to be the first live person to arrive there. It'll be too late. But I want to be the first dead person that gets there. I want to arrive in a Campbell's soup can. Bury me on Mars in [the] thing called the Bradbury Abyss. They gotta name a place on Mars for me, and I will welcome that."