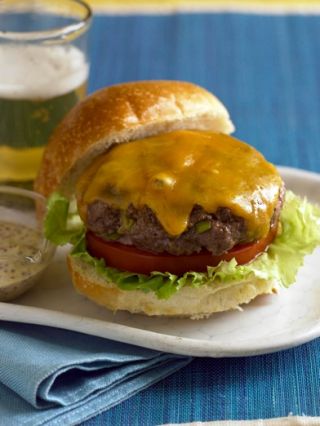 Pools open and dusty grills come out of hiding this Memorial Day weekend, as we remember fallen war heroes and honor the living. To ensure your Memorial Day cookouts sizzle, rather than fall flat with dry burgers and pouty pals, here are some tips served up with a healthy side of science.

Although the word barbecue is sometimes used to describe any act of outdoor food preparation, the word actually refers to meat slow-cooked over charcoal or wood. The Memphis in May World Championship Barbecue Cooking Contest, held annually in Memphis, Tenn., defines barbecue even more strictly, as "pork meat (fresh or frozen and uncured) prepared only on a wood and/or charcoal fire."

Because authentic barbecue is cooked at low temperatures, it rarely blackens, though soot from the wood fire may turn it dark brown.

For a crispy-charred crust on your chicken breasts or steak, try cooking on a grill over high heat. The black stuff is made by a simple combustion reaction; the heat causes the amino acids (which make up the meat's proteins) react with sugars inside the meat, leaving behind blackened, partially combusted carbon.

Eating red meat can come with some guilt, as the juicy goodness has been linked to all kinds of health hazards, from cancer to cardiovascular disease. But if you're hankering after a juicy burger, guilt-free, try an herbal topping.

Studies show that herbs in the Lamiaceae family — such as rosemary, sage, and oregano — may keep meat from causing cancer. As part of an ongoing Food Safety Consortium project at Kansas State University, researchers found that burgers marinated with rosemary had 70 to 80 percent less heterocyclic amines (HCAs) than those soaked in a plain marinade. (HCAs can mutate DNA and are suspected carcinogens.)

When you throw a raw steak or patty on a hot grill, the meat's amino acids and sugars produce unstable compounds called free radicals. These radicals then react with beef's creatine to make HCAs, Kansas State researcher J. Scott Smith, a professor of food chemistry, explained to LiveScience in a past article on healthy burgers.

Herbal antioxidants halt this process, chemically soothing the free radicals before they start creating mutagens all over your basic backyard burger or a beautiful porterhouse steak. While marinades are best because they cover the whole surface, simply shaking on dried herbs may reap the same health benefits.

This decision can be an important one, as the grills burn at different temperatures with different amounts of moisture. Charcoal and wood burn hotter, and drier, than gas.

That's because propane contains moisture, Joachim said. For every hour of grilling on gas, you release a half-cup to a cup of water vapor into your grill. That keeps the temperature down and prevents the formation of a seared, browned crust on your meat. [Top 10 Gas Grills of 2012]

Some gas grills now come with a sear burner, or a ceramic block that holds heat better than the grill grates. Because the burner can build up more heat, home grillers can use it to brown the outside of a steak or pork chop to get that dark crust, he added.

Speaking of sear, why is it so yummy? The secret is the Maillard reaction, named after Louis-Camille Maillard, who was the first to study this chemistry in the late 1900s. When you apply heat to your burger or other meat, the amino acids hidden inside react with sugars to create hundreds of flavor compounds. Maillard reactions make pretty much everything taste amazing, including roasted coffee, grilled vegetables and even your morning toast.

4. The secret to the juiciest burgers

"The trick with ground meat is once you grind up meat, you're grinding up the muscle fibers, and these are what hold the moisture in," Joachim told LiveScience. "What I recommend doing is adding moisture back in."

That added moisture can take many different forms: Try apple butter in turkey burgers and steak sauce in hamburgers. And if you're exhausted from Memorial Day preparation, you can just mix ice water into the ground meat, along with whatever seasonings you're adding. Not only does the ice water add moisture, it also keeps the center of the burger cool so it doesn't overcook.

The other key component of the perfect burger — turn off the nutritionist in you — is fat. Joachim recommends ground beef with 80 percent protein and 20 percent fat. Rather than making a burger juicier, the extra fat stimulates saliva production, moistening your mouth.

To entertain even the pickiest of vegetarians, the grill may be your best bet.

The trick to grilling vegetables is remembering that they're edible raw, Joachim said, so you don't need to leave them on the grill until they scream for mercy. Just oil them, sear them over medium-high heat and enjoy. For firmer veggies like corn, you'll need a little more time. For corn, simple is best: Throw the ears, husks and all, on the grill over medium-high heat and let them cook for 15 or so minutes, turning occasionally, until the husks are blackened. Inside, the corn will be perfectly done. [10 New Ways to Eat Well]

If you're cooking up veggie burgers, try to dress them up with masculinity — by searing in those manly grill marks or covering it with the usual burger toppings — as a recent study found guys may snub such vegetarian alternatives due to their "girly" image.