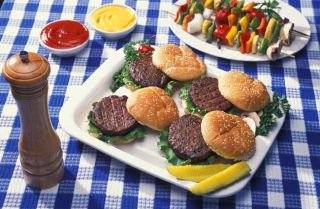 A bloody steak or char-grilled burger may be just what evolution ordered to bulk up a man's muscles in preparation for a big-game hunt. But even today, when meat is more likely to come cut and packaged than bloodied on the forest floor, both men and women tend to view the protein as masculine and macho, finds a new study.

The results, detailed in the October 2012 issue of the Journal of Consumer Research, may explain why men are less likely than women to eat vegetables and instead choose foods that seem to jive more with their macho self-image, the researchers said.

The research also offers some advice for nudging men to eat more veggies. "For a wife or company trying to get guys to eat more plant-based protein instead of meat, one of the things [this research] indicates is that you probably need to make that protein appear to be more meatlike," said study researcher Brian Wansink, director of the Cornell University Food and Brand Lab. "So you need to take that soy burger and put grill marks on it," added Wansink, author of "Mindless Eating: Why We Eat More Than We Think" (Bantam, 2007).

In a number of experiments, most of which included individuals from the United States and Great Britain, the researchers looked at so-called consumption metaphors. They found that people rated meat as more masculine than other foods, such as vegetables, which were rated as more feminine. Participants also viewed meat-eaters as more masculine than people who do not eat meat. [7 Foods Your Heart Will Hate ]

In another part of the research, 384 university students rated 23 foods on their perceived masculinity and femininity on a scale from 0 to 10, or "not at all" to "extremely." The top 5 most masculine foods were, in order of most to least masculine: medium-rare steak, hamburger, well-done steak, beef chili and chicken. And the most feminine foods, from most to least, were: chocolate, peach, chicken salad, sushi and chicken.

You are what you eat?

This "masculine meat" phenomenon seems to hold in other countries as well. In one study of 23 languages with gendered pronouns, the researchers found "that the vast majority of these gendered words and these languages associate meat with the masculine pronoun," Wansink told LiveScience.

The food choices and manly meat link likely comes from self-image, Wansink said. "It's very much inconsistent with the image a lot of them have of themselves," he said during a phone interview. And regarding vegetables, even protein-rich tofu, "it's not something a strong man can survive on."