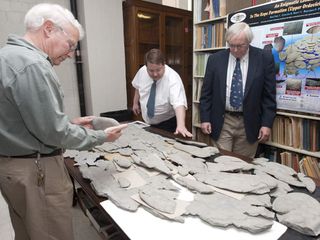 A mysterious fossil that has evoked images of a sea monster roaming the shallow waters of prehistoric Cincinnati may not be the remains of such a complex life form, but even so scientists are stumped as to what kind of creature (or sea plant) it was.

The researchers, who presented the finding at a Geological Society of America meeting in Dayton, Ohio, say one thing is sure: The enigmatic "blob" — discovered in elliptical pieces that, when fitted together, extended about 7 feet (2.1 meters) long and 3.5 feet (1 meter) wide — was once alive.

The team of scientists, along with the fossil hunter who discovered the 450-million-year-old specimen, suggest a range of possibilities: a type of huge algae or microbial mat, or even a member of the cnidarian family, which includes jellyfish (though scientists concede the jellyfish idea is highly unlikely).

"It's really got us baffled as to just how it looked when alive," David Meyer of the University of Cincinnati geology department told LiveScience. "My initial thought was an algal mat on the sea bottom, and then it got deformed somehow into these funny shapes and then preserved." [Photos: Small Sea Monsters]

A paleontologist not involved in the discovery doubts the organism was a complex life.

"The discovery is certainly interesting. I would diverge on the interpretation, however," said Bruce Lieberman, a University of Kansas geology professor who is senior curator of invertebrate paleontology at the university's Biodiversity Institute. "I wonder if it is possible that this represents several broken pieces of a coral that died and were then overgrown, either by a bryozoan or possibly a sponge, as it lay on the seafloor."

"I knew right away that I had found an unusual fossil," Fine said in a statement. "Imagine a saguaro cactus with flattened branches and horizontal stripes in place of the usual vertical stripes. That's the best description I can give."

The fossil's size, shape and texture stood out from the layer of rock in which it was found. Its texture was a particularly telltale sign of a living organism — the fossil was covered in mini-ripples, sort of like wrinkles or corrugation, Meyer said.

Geological processes can form rippling structures called concretions and nodules, but Meyer said these "wrinkles" could not be explained by such processes.

Other signs of an individual organism: The team not only could tell the fossilized pieces fit together but saw definite boundaries between them and the surrounding shale, Meyer said. However, Meyer is not envisioning some ancient sea monster but rather a much simpler life form: perhaps a colony or mat of microbes or some type of seaweedlike algae. [Lair of Ancient 'Kraken' Possibly Discovered]

What is this blob?

Lieberman agreed with Meyer, saying he'd be "very surprised" if this fossil turned out to be a new complex organism like a huge alga or jellyfishlike creature. "These rocks have been so intensely picked over, over the year, but I think it would be a big surprise if they had discovered something new and on this scale," Lieberman told LiveScience. "I am not saying it is impossible, but I think it would be very unlikely, kind of like finding a new species of mammal: It happens, but it is very rare."

The team also found a number of small trilobites adhering to the surface of the fossil. Meyer suggests the horseshoe-crablike organisms were hiding from predators or even grazing on the mysterious "monster."

So perhaps they were crawling around on a matlike blob or even an upright plant or animal. "One possibility is, if it was more of an upright blob or sac or something, that it may have gotten blown over by currents and storms and knocked over, and thereby the way we see it" today, Meyer said in an interview.

Whatever the case, Meyer concludes that something this odd (nothing so large had been discovered in this rock layer, he said) deserves an explanation. The team plans to give it one as they continue analyzing the specimen.