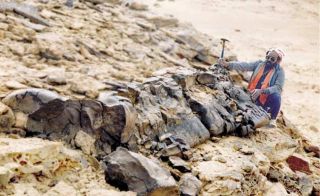 A Prototaxites fossil in the desert of Saudi Arabia. New findings now seem to confirm it is a fungus.
(Image: © Reprinted from Review of Paleobotany and Palynology, Vol. 116, "Rotted wood--alga--fungus: the history and life of Prototaxites Dawson 1959, by Francis Hueber, p. 146, Smithsonian Institution, Copyright 2001, with permission from Elsevier)

A giant mystery organism more than 350 million years old has finally been identified as a humongous fungus.

The enigma known as Prototaxites, which stood in branchless, tree-like trunks up to more than 20 feet tall and a yard wide, lived worldwide from roughly 420 million to 350 million years ago. The giant was the largest-known organism of its day, living in a time when wingless insects, millipedes, worms and other creepy-crawlies dominated, as backboned animals had not yet evolved out of the oceans.

Prototaxites has generated controversy for more than a century. Originally classified as a conifer like a pine tree, scientists later argued that it was instead a lichen, various types of algae or a fungus .

Simple vascular plants, the ancestors of the familiar conifers, ferns and flowering plants of today, had established themselves on land 40 million years before the appearance of Prototaxites, but the tallest among them stood no more than a couple feet high.

On the inside, Prototaxites is clearly not a plant, composed as it is of interwoven tubes just five to 50 microns across (50 microns is about half the width of a human hair).

"With that anatomy, it suggests lichens, fungi or algae," Boyce told LiveScience.

Paleobiologist Francis Hueber of the National Museum of Natural History in Washington, D.C., recently revived the notion that the puzzling organism was a fungus. He ventured to Canada, Australia and Saudi Arabia to collect specimens of Prototaxites, tediously slicing them into hundreds of thin sections and taking thousands of images of them through microscopes to determine identity.

"He built up a convincing case based on the internal structure of the beast that it was a giant fungus, but agonized over the fact that he was never able to find a smoking gun in the form of reproductive structures that would convince the world that it was indeed a fungus," said paleobiologist researcher Carol Hotton, also of the National Museum of Natural History.

Now chemical analyses have revealed that Prototaxites was not a plant, and was likely a fungus, findings detailed in the May issue of the journal Geology.

Hueber, Boyce, Hotton and their colleagues analyzed carbon isotopes in Prototaxites and plants that lived in the same environment approximately 400 million years ago. Isotopes of an element all have the same number of protons in their atomic nuclei but different amounts of neutrons. For instance, all carbon atoms contain six protons in their nuclei, and nearly 99 percent of all carbon atoms in nature possess six neutrons, for 12 particles altogether in their nuclei, which is why such atoms are known as C-12. However, the other 1 percent or so of carbon atoms in nature contain seven or eight neutrons in their cores, and such isotopes are respectively called C-13 and C-14.

The researchers found Prototaxites displayed a much wider variation in its ratio of C-12 to C-13 content than would be expected in any plant.

Plants, lichen and algae typically get their carbon from carbon dioxide in the air, so any given type of plant will typically contain a similar ratio of C-12 to C-13 as another plant of the same type. Fungi, on the other hand, feed on whatever they grow on, and their carbon isotope ratios are as diverse as their diet.

As to why the fungus grew so large, Hotton speculated that its size may have helped it spread its spores farther, "allowing it to occupy suitable marshy habitats that may have been patchily distributed on the landscape."

The relatively simple ecosystems Prototaxites lived in certainly appeared to contain nothing to prevent them from growing slowly for a long time to huge sizes, since plant-eating animals had not yet evolved .

"It’s hard to imagine these things surviving in the modern world," Boyce said.