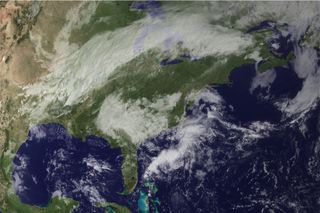 Two weather systems are moving across the U.S. and bringing with them rains for much of the U.S ... and possibly even snow.
(Image: © NOAA.)

The unusually mild, dry season that has graced much of the eastern United States appears to be coming to an end the same way it started: with an impressive and oddly timed nor'easter.

At the end of October, a bizarrely early and heavy snowstorm took out power to millions and canceled trick-or-treating in northeastern states.

Now, following an unusually warm winter, and the warmest March on record, a storm is traveling north, then west, along the East Coast, bringing heavy rain, wind, and, in some high elevations, more than 1 foot (0.3 meters) of snow, according to Tom Kines, a meteorologist at AccuWeather.com.

While the October storm was dubbed "Snowtober," the latest storm is being called "Snowpril" by some.

The storm, which originated on Saturday in the Florida area, is expected to hit western New York, western Pennsylvania, extreme eastern Ohio, parts of northern West Virginia and extreme western Maryland particularly hard, according to Weather.com.

It will probably reach the Toronto area by tomorrow morning (April 24), Kines said.

"While this was a rather strong storm it did have its good points," Kines said. "I know people hate it at the end of April, they don't want it, but in the long term it is good because it is bringing moisture to areas that have been extremely dry."

For example, before this storm, the New York City area has received only about 30 percent of the precipitation that normally falls since Feb. 1. Much of the East Coast to the north and south is in a similar situation, Kines said.

Nor'easters are named for the strong northeasterly winds that accompany them.

"(Nor'easters) typically bring very strong northeastern winds to coastal areas as it moves northward along the coast," Kines said. "This is typically how the eastern part of the country gets big snowstorms. Had this been three months earlier, it would have been a huge snowstorm for a lot of areas."

Nor'easters are uncommon at the end of April, he said. Likewise, the October storm brought heavy snow to areas that typically don't receive their first snowfall until late November or December.

The configuration of a high-altitude band of winds, called the jet stream, played an important role in creating the storm, just as it has in the unusually mild winter, according to Kines.

Over the next few days the jet stream will return to its regular configuration, Kines said.