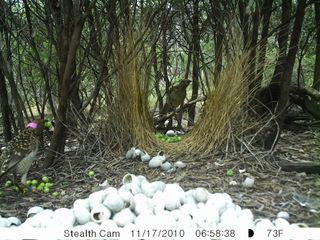 A bowerbird perches in his bower, surrounded by decorative green fruit.
(Image: © University of Exeter)

So-called bowerbirds are known to build elaborate branch-and-vine structures to attract their mates. Now, new research shows that this family of birds may also be accidental gardeners.

Inadvertent or not, these bower gardens establish the bowerbirds as the only species known to "cultivate" plants for uses other than food, said study researcher Joah Madden of the University of Exeter in the United Kingdom.

"Until now, humans have been the only species known to cultivate plants for uses other than food," Madden said in a statement. "We grow plants for all kinds of things — from drugs, to clothing, to props that we use in our sexual displays such as roses — but it seems we are not unique in this respect."

Bowerbirds are talented architects in general. Earlier work has shown that the birds construct their bowers so that they look bigger than they really are when sitting in them.  They clear litter and leaves from around their bowers, protecting them from fire — and, it turns out, creating the perfect space for a "garden."

Madden and his colleagues studied bowerbirds in Taunton National Park in central Queensland, Australia. They observed that there were more potato bushes (Solanum ellipticum) around bowers than in surrounding areas. These purple-flowered, green-fruited plants are also known as "bush tomatoes."

The researchers established that the birds weren't choosing locations based on high concentrations of potato bushes; rather, the bowers predated the extra bushes. The researchers reported their work in the April 24 issue of the journal Current Biology.

"We do not believe bowerbirds are intentionally growing these plants, but this accumulation of preferred objects close to a site of habitation is arguably the way any cultivation begins," Madden said. "It will be very interesting to see how this mutually-beneficial relationship between bowerbirds and these plants develops."