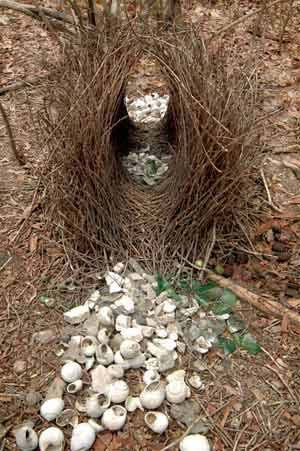 This somewhat fireproof next is a courting zone of a male great bowerbird.
(Image: © Tomoki Okida, Japan Ethological Society and Springer Japan)

To beguile females, some males build mansions, others build bowers.

Male great bowerbirds (Chlamydera nuchalis) of northern Australia erect two walls of twigs partially flanking a six-foot-long passageway that they pave with conspicuous bits of bones, stones, shells, and fruits. There, the males strut their stuff, inviting females over for a tryst.

Bower construction takes a week or longer, so it's no fun when brush fire sweeps through the savanna and threatens the males' handiwork.

Yet, as a new study shows, the bowers seem strangely immune to fire.

In 2006, flames scorched part of a savanna outside the city of Darwin. A team led by Osamu K. Mikami of Kyushu University in Fukuoka, Japan, found that of the nine bowers there, only three were destroyed. The other six sat intact in the middle of small patches of unburned ground. Yet according to the proportion of burned to unburned savanna, the chance of all bowers surviving should have been less than 8 percent. All nine should have toasted.

Bowerbirds remove flammable leaves and litter from around their bowers, or cover them with decorations. That behavior may have evolved because it creates a firebreak.

On the other hand, baring the ground and decorating it also enhance a bower's visibility, so the habit may simply be a by-product of the bower's main function: impressing females.

The findings were published in the Journal of Ethology.