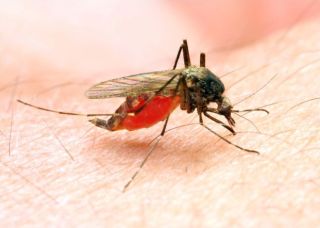 An Anopheles mosquito, which spreads malaria — a life-threatening disease that impacts hundreds of millions of people around the world. Effective anti-malarial treatments created through synthetic biology will soon be widely available in developing countries.
(Image: © Thinkstock)

Synthetic biology is a fast-growing field of science and engineering that has the potential to improve everything from environmentally-friendly energy sources and industrial processes to medicine development and how we feed the world. The global projected market for products produced via synthetic biology is expected to reach $4.5 billion by 2015, according to Global Industry Analysts.

Below, Lily Whiteman of the National Science Foundation interviews Johns Hopkins University's Jef D. Boeke. Boeke is a leader in the field of synthetic biology and below discusses the promise it holds.

WHITEMAN: What is synthetic biology?

BOEKE:Synthetic biology is an exciting, rapidly growing new field created from the marriage of traditional biology and engineering. It's dedicated to designing and constructing from scratch new sequences of DNA not found in nature. These new sequences are used to create entirely new biological functions and systems, and increase the efficiency of existing biological functions and systems.

The ongoing rapid growth of synthetic biology is made possible by the rapid growth of many fields that contribute to synthetic biology — including genome sequencing, computing, nanotechnology and various laboratory techniques. What's more, the development over the last 20 years of systems biology — the study of large systems composed of tens, hundreds or thousands of genes and their interactions — has helped inspire confidence in the potential for synthetic biology research to produce important breakthroughs.

WHITEMAN: How does synthetic biology differ from genetic engineering?

BOEKE: Genetic engineering involves altering the genetic material of a cell, usually by transferring one gene from a donor to a host organism, in order to give the host organism desired traits. But instead of involving just one gene, synthetic biology involves creating whole new biological functions, systems and eventually organisms.

WHITEMAN: What types of synthetic biology projects are scientists currently working on?

BOEKE: A typical project could involve engineering a process that would produce large quantities of a desired molecule, such as a biofuel. In such cases, a sequence of DNA that is not currently found in nature would be synthetically generated to carry out the desired production process from start to finish, and would then be inserted into a host organism of choice that would provide the machinery to carry out the production process.

The relationship between the synthetically generated DNA and the host organism is analogous to that between computer software and its accompanying computer.

Typical larger-scaled projects involve designing whole genomes that behave differently than native genomes in ways that offer practical utility or insights into how genomes work. Several projects conducted by my research team fall into this category. For example:

Most of my team's research has been funded by the National Science Foundation. They took a brave step in funding our work because our ideas about synthetic biology were once considered kind of crazy. But we are very pleased to see these projects bear fruit now.

WHITEMAN: Why do you focus your research on yeast cells as opposed to any other type of organism?

All yeast are single-celled fungi. Like plants, animals and humans, yeast are eukaryotic organisms — organisms that have complex internal structures, such as a nucleus enclosed by a membrane. Because of such similarities between yeast cells and those of cells of higher organisms, including humans, insights into cellular processes in yeast may yield insights into basic processes in human cells.

WHITEMAN: What is currently the state-of-the-art in synthetic biology and where it is going?

BOEKE: Scientists are getting better and better at synthesizing pathways that involve anywhere from a handful of genes to tens of genes. But we still have a long way to go before we can engineer larger pathways, and eventually networks of these genes, which interact with one another to cause complex behaviors in micro-organisms and multi-cellular organisms, including humans.

There are still so many unknowns and complexities involved in predicting the behavior of large numbers of genes. One of the biggest challenges currently facing the field of synthetic biology is our inability to accurately predict the detailed behavior of complex biological systems.

For example, even when we can engineer a new pathway to manufacture a particular desired compound, we cannot accurately predict how much of the desired compound will be produced by the pathway. The only way that we can currently estimate these quantities is through trial and error — a relatively costly and time-consuming process.

WHITEMAN: What are some of the societal problems that synthetic biology may help solve?

BOEKE: Synthetic biology is increasingly being used to produce many types of products that will help create jobs, contribute to American competitiveness, and improve the health and welfare of large numbers of people. These products range from biofuels that will help promote our energy independence to lubricants used in manufacturing to treatments for common diseases.

For example, biosynthetic "human" insulin has been manufactured for widespread clinical use for years. Synthetic biology will soon contribute to the fight against malaria — which killed about 655,000 people in 2010—mostly African children, according to the World Health Organization.

Here's how: the only effective anti-malarial treatments that have traditionally been available are based on compounds that contain artemisinin — a chemical derived from a plant called sweet wormwood that grows in parts of Africa and Asia. But because weather and market conditions in wormwood habitats are volatile, the production of artemisinin has traditionally been expensive, and supplies have been subject to boom-and-bust cycles.

(Article is continued below video)

WHITEMAN: What types of safeguards to protect the public are used in laboratories where research in synthetic biology is conducted?

BOEKE: There are many:

Regarding yeast genome synthesis and safety, as recent research published by the J. Craig Venter Institute has shown, synthetic genomics is now a real part of modern bioscience and here to stay. While the Venter Institute chose to synthesize the genome of a mammalian commensal bacterium due to its small genome size, about which relatively little is known biologically, we have chosen to synthesize the genome of S. cerevisiae, an extremely well-studied organism with a vibrant research community attached to it.

Other synthetic genomes that have been constructed without incident include a bacteriophage, fX174, a mouse retrotransposon, poliovirus and the 1918 flu virus. The latter two cases represent pathogens; naturally, these were synthesized and handled in high containment conditions.

Because S. cerevisiae has been consumed by humans for millennia, it is officially "Generally Regarded as Safe" by the Food and Drug Administration. Also, following the Asilomar Conference on Recombinant DNA, a set of guidelines was developed by the Recombinant DNA Advisory Committee. Due to its generally innocuous nature, the yeast S. cerevisiae was exempted from recombinant DNA regulation. We therefore feel it is arguably the best organism for synthetic genomics.

We incorporate the following safety practices into our research program:

Synthetic biologists are proceeding with a great deal of caution. Their laboratories are required to adhere to various stringent government regulations that ensure that biological agents are isolated and contained in enclosed facilities and are handled only under limited and controlled circumstances. I do not know of a single instance where a person has been injured by laboratory research in synthetic biology. But this field offers many potential solutions to pressing problems that are important to societies all over the world.

Watch a video about how Boeke's students are using synthetic biology to combat world hunger.