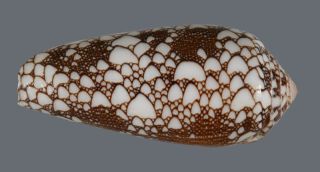 A shell from the venomous cone snail Conus omaria, which lives in the Pacific and Indian Oceans. A toxin found in the snail's venom could be a useful tool in designing new medicines for a variety of brain disorders, including Alzheimer's and Parkinson's diseases.
(Image: © Kerry Matz, University of Utah)

Willow tree bark was the original source of aspirin, while the antibiotic penicillin came from an ordinary mold. More recently, a potent painkiller has been derived from the venoms cone snails use to kill their prey, and a chemical produced by the Pacific yew tree is now the powerful cancer-treating drug paclitaxel (Taxol®).

Nature is a prolific source of new medicines. In fact, natural products have led to more than half of the new drugs introduced during the past 25 years.

Natural products come from plants, fungi and bacteria in every corner of the globe. Over millions of years, organisms have evolved protective chemicals that interact with specific proteins in their enemies. Because all living things share the same basic biochemistry, those chemicals can interact with the same proteins in people. Chemists supported by the National Institutes of Health seek to discover and examine such natural products with the hope of developing new medicines to improve human health.

The potential applications of some natural products are clear from the start. A substance that kills bacteria—whether it comes from another bacterium, a plant or (rarely) an animal—might work as an antibacterial drug in humans. Natural products can also have less obvious applications for treating conditions such as heart disease, depression and epilepsy. Some products have multiple applications. A portion of the penicillin molecule lowers cholesterol, and a chemical spinoff of the malaria drug artemisinin seems to quell some cancers.

Scientists estimate that Earth is home to at least 250,000 different species of plants, up to 30 million insect species and comparable numbers of fungi, algae and bacteria. Despite this vast biodiversity, chemists have tested relatively few organisms to see whether they harbor medically useful substances.

Chemists seek new drugs and drug precursors in forests, oceans, caves and even ordinary backyards. Many ecologically unique habitats are promising sources of natural products because they host a variety of species that teem with undiscovered chemicals.

Here are just a few examples of known and potential drugs that were found in unlikely places:

Building on Nature in the Lab

After finding a substance with interesting biological properties, researchers often try to reproduce it in a lab.

One reason to do this is that natural substances frequently need to be chemically modified in order to work safely and effectively in the human body. Using methods unavailable in nature, chemists can create tens or hundreds of molecules with slightly different structures. One of these molecules might have the right properties to be a medicine.

Researchers also want to find ways to cultivate harvested products or build them from scratch in the lab so they can efficiently produce large quantities. For instance, it takes more than one ton of sea squirts to produce a single gram of ET-743. Research by Harvard Universitychemist and Nobel laureate Elias J. Corey enabled chemists to synthesize ET-743 in the lab in much higher amounts—enough for it to enter clinical trials and be used in people. Such alternative manufacturing methods are especially important when the organism that makes a natural product is in short supply.

Natural products chemistry can be labor-intensive and time-consuming, so researchers are seeking new ways to improve the discovery and production processes. For example, a team at the University of California, San Diego, recently developed computational tools to rapidly determine whether natural compounds collected in environments such as oceans and forests are potential new candidates for drug development.

Another fairly new procedure called metabolic engineering allows researchers to remove the genetic instructions for natural products from certain microorganisms, alter them and put them back—potentially boosting production of natural products at the genetic level or custom-making different products that don't exist in nature.

Where nature is hiding the next medical treasure is anyone's guess. What's clear is that chemists' creative handiwork is essential to discovering and adapting natural products to improve human health.