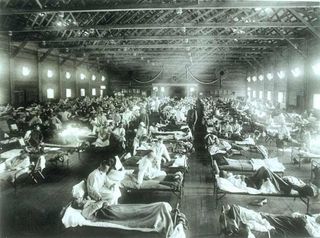 To understand the sometimes bold, sometimes nervous governmental reactions to the rapidly growing swine flu crisis, one need only look at the incredibly unpredictable history of horrifically deadly flu pandemics and the frightening outbreaks that did not become pandemics.

Pandemics, plagues and pestilence have beset humans throughout history. But the strategy and response to swine flu unfolding in recent days is rooted in what has been learned from modern flu outbreaks and pandemics going back to the colossal 1918 event.

The appearance of several new flu strains in humans over the past few years — including the H5N1 "avian flu" strain in the late 1990s — illustrates the challenges faced annually by researchers trying to track, contain and develop vaccines for the fast-evolving virus known as influenza.

1918: "Spanish flu" H1N1 Pandemic The most devastating flu pandemic in modern times, killing more than 500,000 people in the United States, and some 50 million people worldwide. Somewhere between 20 and 40 percent of the global population was ill.

Some people who felt well in the morning became sick by noon and were dead by nightfall.

Those who did not succumb to the disease within the first few days often died of complications from the flu (such as pneumonia) caused by bacteria. Rather than just preying on the very young and old, as seasonal flus typically do, this one killed many healthy young adults, too: Mortality was highest among adults 20 to 50 years old.

1957-58: "Asian flu" H2N2 Pandemic First identified in China, this virus caused roughly 70,000 deaths in the United States. Because this strain has not circulated in humans since 1968, no one under 30 years old has immunity to it. The virus was quickly identified, due to advances in scientific technology, and a vaccine was available in limited supply by August 1957. Still, two waves of infection struck, in the fall of '57 and then January-February of '58. The elderly had the highest death rates.

1968-69: "Hong Kong flu" H3N2 Pandemic First detected in Hong Kong, this virus caused roughly 34,000 deaths in the United States during the 1968-69 season. H3N2 viruses still circulate today. Those over the age of 65 were most likely to die. The virus was similar to the 1957-58 Asian flu, so some people may have had some level of immunity.

1977: "Russian flu" H1N1 Infects Humans Isolated in northern China, this virus was similar to the virus that spread before 1957. For this reason, individuals born before 1957 were generally protected, however children and young adults born after that year were not because they had no prior immunity. By January 1978, the virus had spread around the world, including the United States. Because illness occurred primarily in children, this event was not considered a true pandemic. Vaccine containing this virus was not produced in time for the 1977-78 season, but the virus was included in the 1978-79 vaccine.

1997: H5N1 Infects Humans The first time an influenza virus was found to be transmitted directly from birds to people, with infections linked to exposure to poultry markets. Six people in Hong Kong died. This virus was different because it moved directly from chickens to people, rather than having been altered by infecting pigs as an intermediate host. In addition, many of the most severe illnesses occurred in young adults similar to illnesses caused by the 1918 Spanish flu virus.

1999: H9N2 Infects Humans Appeared for the first time in humans. It caused illness in two children in Hong Kong, with poultry being the probable source.

2002: H7N2 Infects Humans Evidence of infection is found in one person in Virginia following a poultry outbreak.

2003: Multiple Events (Appearance of new influenza strains in humans) H5N1: Caused two Hong Kong family members to be hospitalized after a visit to China, killing one of them, a 33-year-old man. (A third family member died while in China of an undiagnosed respiratory illness.) H7N7: In the first reported cases of this strain in humans, 89 people in the Netherlands, most of whom were poultry workers, became ill with eye infections or flu-like symptoms. A veterinarian who visited one of the affected poultry farms died. H7N2: Caused a person to be hospitalized in New York. H9N2: Caused illness in one child in Hong Kong.

2004: Multiple Events (Appearance of new influenza strains in humans) H5N1: So-called Avian Flu causes illness in 47 people in Thailand and Vietnam, 34 of whom died. Researchers are especially concerned because this flu strain, which is quite deadly, is becoming endemic in Asia. H7N3: Is reported for the first time in humans. The strain caused illness in two poultry workers in Canada. H10N7: Is reported for the first time in humans. It caused illness in two infants in Egypt. One child’s father is a poultry merchant.

2005: H5N1"Avian Flu" Fears Rise The first case of human infection with H5N1 for the year arises in Cambodia in February. By May, WHO reports four Cambodian cases, all fatal. Indonesia reports its first case, which is fatal, in July. Over the next three months, seven cases of laboratory-confirmed H5N1 infection in Indonesia, and 4 deaths, occur. On Dec. 30, WHO reports a cumulative total of 142 laboratory-confirmed cases of H5N1 infection worldwide, all in Asia, with 74 deaths. Asian countries in which human infection with H5N1 has been detected: Thailand, Vietnam, Cambodia, Indonesia and China.

2007: H5N1 "Avian Flu" Still No Pandemic In February, the WHO confirmed the first human deaths from H5N1 infection in the African nation of Nigeria and in Lao People's Democratic Republic.

2009: H1N1 "Swine Flu" Infects Humans A new H1N1 virus containing swine, avian and human genes emerges in the United States, Mexico and Canada. As of April 29, nine countries have officially reported 148 cases of this "swine flu," with 91 lab-confirmed cases in the United States and one death. Mexico has reported 26 lab-confirmed human cases, and seven deaths. Lab-confirmed cases, but not deaths, are also reported in Austria, Canada, Germany, Israel, New Zealand, Spain and the United Kingdom. The World Health Organization issues a "phase 5" alert on the outbreak, signaling that a pandemic is imminent.

The numbers don't tell the whole story, however. In Mexico, for example, authorities say the death toll is likely closer to 150 already, but the cases have not been fully analyzed.

"I think it's confusing because that is simply a reflection of the reality of the situation," said Dr. Christine Layton, a public health researcher who specializes in influenza at RTI International, an institute in North Carolina. "It's a confusing situation — the confusion of the way disease is reported and measured and classified."

Officials are still scrambling to understand the new strain, and efforts to develop a vaccine could take months, they say.