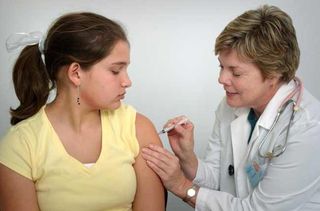 The nurse in this 2006 photograph was in the process of administering an intramuscular vaccination in the left shoulder muscle of a young girl. The nurse was pinching the overlying shoulder skin, in order to immobilize the injection site.
(Image: © CDC)

This is the last article in a 4-part LiveScience Special Report on the flu.

Eds Note: Late in the day on April 29, the World Health Organization elevated the alert level on the swine flu outbreak from phase 4 to phase 5, which is a strong signal that a pandemic is imminent. Phase 6 is the "pandemic phase."

{{ video="LS_090428_pandemic" title="The Truth about Pandemics " caption="Dr. Marc Siegel explains why the term pandemic often inspires more fear than it should, how the media plays on fears, and how governments often make wrong and costly moves." }}