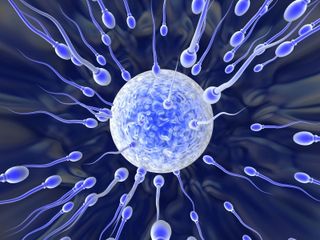 They say opposites attract, and somehow even the wildly different X and Y chromosomes are able to pair up during sperm formation. New research shows how complex that process is, and it pinpoints a step in the process that can go awry, leading to sex-chromosome diseases or infertility.

The research team, which conducted its study on mice, thinks the results also would apply to humans and eventually could result in a new infertility treatment.

Lead researcher Liisa Kauppi, of the Memorial Sloan-Kettering Cancer Center, discovered that the X and Y chromosomes have multiple mechanisms to make sure this unlikely pair are able to combine and effectively separate into individual and viable sperm.

"This is really the Achilles’ heel, the most difficult region of the genome to pair, so that's why these mechanisms have evolved," co-author Maria Jasin, also of Sloan-Kettering Cancer Center, told LiveScience.

Kauppi noted, "the X and Y chromosomes really behave quite differently than the rest of the chromosomes."

The miracle of conception is not actually a miracle; the bodies of all mammals go through a special type of cell division to make sperm and egg cells. Each cell carries two sets of genes (sequences of DNA), which are twisted into thread-like chromosomes, except for egg and sperm cells, which have only one set.

During fertilization, the half of mom's chromosome set (in the egg) gets paired with the half of dad's set contained in the sperm.  The two sets are very similar, but contain certain differences, so they are called "sister chromosomes." This new set of chromosomes grows into a full-sized human, which then makes it's own sperm or eggs. When the cell gets ready to divide to make sperm, the two sets of chromosomes copy themselves and line up with their sisters in pairs.

To ensure high genetic diversity when the chromosomes pair, they play a game of switcharoo and swap some of their genetic information. They do this by cutting both sister chromosomes in the same place, called a "double-strand break," and then stitching the swapped portion into place, called a "crossover," or recombination.

"We understand a great deal about the actual mechanism of recombination,” said Scott Hawley, of Stowers Institute for Medical Research in Kansas City, Mo., who wasn't involved in the research. However, “one of the areas that still remains pretty opaque is how cells control where recombination occurs."

Recombination happens pretty easily in most chromosomes, which are very similar to each other and don't need too much help to pair up anywhere along their length. The confusion comes with the male's sex chromosomes – the X and Y (females have two X's which can crossover like any other pair). These two chromosomes are vastly different in size, shape and the sequence of their nucleotides (the chemicals that make up the DNA ladder molecule) yet they are required to pair up and cross over like any other chromosome pair.

The X and Y chromosomes have a tiny region, covering less than 1 percent of their length, where they can match up and perform this strand-swapping. The cells have to make sure to cross over the DNA in this tiny matching area to make viable sperm. If they can't, the X and Y chromosomes won't divide and the sperm cell will die, or genetic diseases such as Klinefelter's (where the child ends up with two Xs and one Y) or Turner's (a single X) could occur.

Kauppi studied sperm formation in normal mice and noticed that the sex chromosome crossover happens after the rest of the chromosomes are paired. The reason simply could be that they take longer to make the double-strand breaks.

But then the team tested mice with different forms of the protein that controls this crossover process, called SPO11beta or SPO11alpha. For the male mice that expressed only SPO11beta, they were infertile about 70 percent of the time; that wasn't the case for males with the alpha form of the protein, which is important for viable sperm formation, Kauppi said.

It is likely that this sex chromosome crossover happens the same way in humans, which is what Kauppi is studying next. Based on rates of X-Y pairing-related diseases, co-author Scott Keeney, also of Sloan-Kettering, noted "there are some individuals who are more prone to having the X and Y misbehave."

"There are many patients who show up in clinics where the actual cause of infertility isn't known," Keeney told LiveScience.

Diagnostic tests could be created to determine if male infertility is a result of these processes, and possible treatment options could be developed. Tests also could help diagnose the likelihood of a sex chromosome anomaly, like Klinefelter's or Turner's syndrome.

"This opens up the field in a really exciting way," Hawley told LiveScience. "I really thought this was a terrific paper."