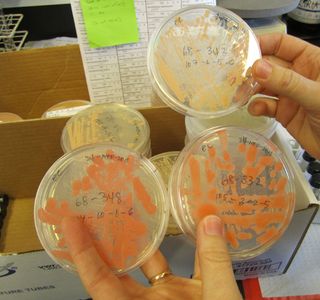 When swabbed onto Petri plates, yeast can grow into colorful colonies, like these, seen at the Phaff Yeast Culture Collection at the University of California, Davis, in December.
(Image: © Wynne Parry)

DAVIS, Calif. — Two freezers tucked behind a lab on the campus of the University of California, Davis, are kept humming at an icy-cold minus 112 degrees Fahrenheit (minus 80 degrees Celsius). White and unremarkable on the outside, inside they are packed with exotic living things, kept dormant by the blistering cold.

Each freezer contains more than 10,000 strains of microbes, most of them single-celled fungi called yeast, some collected more than a century ago. This is the world's fourth-largest public collection of wild yeast, and it has an enthusiastic ambassador in Kyria Boundy-Mills.

"I've got the greatest job in the world, because I get to play with yeast all day," Boundy-Mills, the collection's curator, said, laughing. [Album: Exotic Yeasts, Frozen in Time]

Yeasts are ubiquitous and diverse. Members of this collection have come from Antarctic seawater, the air, animal dung, the surfaces of fruits and vegetables, plants, insects, pickled foods and food-processing facilities. The list includes some strangely specific origins, such as macaroni, a horse's tumor, cerebrospinal fluid and dandruff.

The list of the ways we use and interact with yeast is just as far-ranging. They are the reason we have alcohol and leavened bread, they hold promise in producing biofuels and drugs, and they are used in nutritional supplements. And they can cause infections.

Boundy-Mills checks each vial from the thousands kept in the freezer every five years to make sure each one still has plenty of living cells inside. Her job description also includes sending out Petri dishes with colorful smears of yeast colonies to other researchers, and looking for new yeasts to add to the collection.

The oldest yeast in this collection, the Phaff Yeast Culture Collection, arrived in 1893 from a wine fermentation. Herman Phaff, the collection's namesake, built much of it, about 6,000 yeasts. Only about 7,000 yeast strains are in the public catalogue, where those looking to work with yeast go to order it.

The others include those that cause disease, like Candida albicans, the yeast in yeast infection; proprietary strains created for specific purposes, such as brewing a particular beer; or simply have not yet been identified.

New species continue to arrive. Boundy-Mills is leading a biodiversity survey in Indonesia, which includes a search for new microbes. These microbes, which can be yeasts, bacteria and molds, are examined for their potential to produce biofuel or pharmaceuticals.

Certain yeasts produce and accumulate oil — think biodiesel — when fed cheap sugar in the form of corn stalks or rice straw. Other yeasts break down the tough cellulose in plant material, including wood, to produce ethanol and similar substances that can be used as biofuels, according to Boundy-Mills.

As part of the biodiversity survey, the researchers are looking inside the guts of wood-eating beetle larvae to find microbes that break down cellulose or use those products to make other useful things, like vitamins.

Between the beetle larvae and samples taken from the soil and the dead wood itself, Boundy-Mills and others have found about 100 different species of yeasts, 37 of which are new to science, and several of which appear to accumulate oil. So far, they are still looking for species with the potential to improve the production of ethanol.

Some older inhabitants of the collection also show biofuel potential. She sees potential in one yeast, which grows into orangish colonies colored by the beta carotene (as in carrots) it produces. Collected by one of Phaff's students in 1967 from seawater off Point Reyes, Calif., this strain produces fairly large amounts of oil, making it a good candidate for biodiesel, she said.

Students use and contribute to the collection. Ryder Diaz, a graduate student in population ecology, is studying the microbes associated with solitary bees. He collects the microbes, both yeasts and bacteria, from the nectar of flowers and the pea-size mass of nectar and pollen that the mother bee provisions for her eggs.

Diaz is interested in figuring out which microbes show up with which bees. "I like to think of it as the Facebook for bees and microbes, How are these organisms connected to one another? Do they share the same network, or are they partitioning their communities," he said.

The information he collects will go into the collection database; it's not yet clear if new species have turned up.

Boundy-Mills has no favorite yeast: "That's like asking me which one of my children I like better," she told LiveScience. "'The World's Favorite Yeast' is, of course, Saccharomyces cerevisiae, because we use it to make beer, bread and wine. My job is to get other yeasts to work making other wonderful things.