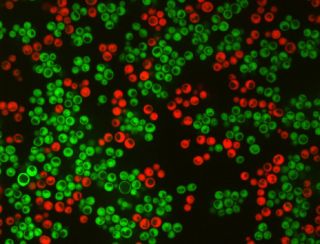 Early single-celled life may have serendipitously transformed into multicellular forms to make the most of resources, suggests a lab study revealing that when brewer's yeast cells clump together they can take in food more efficiently.

The first transition from simple, single-celled organisms to cooperating groups of cells is believed to have occurred a little over 2 billion years ago. This multicellular arrangement was a step toward more complex organisms, like us, who possess different types of cells for different functions, such as red blood cells capable of carrying oxygen around our bodies.

Multicellularity evolved once in animals and many times independently for plants, fungi and bacteria, according to lead researcher John Koschwanez, a postdoctoral fellow at Harvard University.

His and his colleagues' research focused on a particular scenario that could have led single-celled organisms, like these yeast, to collaborate in a simple, multicellular form. [Deepest Dwelling Multicellular Life Found]

The budding yeast lives on simple sugars, which it makes by using an enzyme called invertase to chop more complex sugars, like sucrose, into smaller ones, such as glucose and fructose. But because most of these simple sugars escape by diffusing into the surrounding environment, the yeast cell can't consume all the food it makes.

Koschwanez and his team compared the success of single, isolated yeast cells (Saccharomyces cerevisiae) in a low-sucrose solution (table sugar) with that of clumps of yeast cells, formed naturally when the cell walls of the yeast failed to fully separate during cell division. They found that the cells in clumps continued dividing, an indication they were eating well and growing normally, while single cells in the same solution did not divide.

The secret is that the clumped cells happen to help each other out.

"Cells right next to each other can capture some of the sugars that their neighbors are producing before the sugars diffuse away," he wrote in an email to LiveScience. "This makes it more likely that they will capture enough sugars to grow and divide."

Koschwanez said the phenomenon is similar to one in which a man wearing a rose on his lapel at a wedding won't smell its fragrance when he's standing alone, because the scent is too weak; however, when he and others who are wearing roses gather for a photo, he can smell it because the scent from all of the roses is now diffusing into the air near them.

Similar to the budding yeast, both bacteria and other fungi can secret enzymes to break down starch in plants in order to digest the resulting simple sugars, according to Koschwanez.

The research appeared today (Aug. 9) in the journal PLoS Biology. His ongoing research indicates that single-celled yeast grown for many generations in a low-sucrose solution can evolve the clumpy behavior, Koschwanez said.