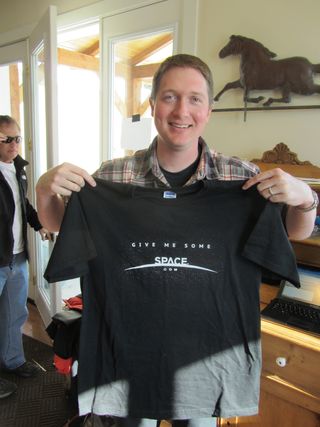 Project Aether: Aurora leader Ben Longmier holds up a SPACE.com T-shirt that rose to the edge of the Alaskan aurora in a weather balloon on April 11, 2012.
(Image: © Mike Wall/SPACE.com)

A SPACE.com shirt has made quite a journey, traveling from New Jersey to San Francisco to the edge of the northern lights high above the heart of Alaska. And its odyssey may not be over yet.

The black T-shirt currently sits in the frigid Alaskan wilderness, waiting to be rescued. With it are a high-definition GoPro camera, GPS equipment and the weather balloon that carried this payload about 19 miles (30 kilometers) high in Earth's atmosphere before bursting.

The balloon is one of many launched last week by members of an expedition called Project Aether: Aurora, which sought to photograph and study Alaska's dazzling northern lights — also known as the aurora borealis — from a unique high-altitude perspective. I tagged along with the expedition April 10-12, bringing along the T-shirt as a proposed payload addition.

SPACE.com managing editor Tariq Malik had mailed the shirt from New Jersey to my apartment in San Francisco, and the garment made its way to Fairbanks in my luggage. In Alaska, Project Aether: Aurora leader Ben Longmier was kind enough to lash the T-shirt to a balloon rig that launched in the early-morning hours of April 11.

From the ground, the aurora that morning was bold, bright and dramatic, so the camera and shirt probably witnessed quite a show. Longmier is eager to see what the camera recorded, but the balloon came down in a location too remote for his team to reach in time before everyone had to head home last weekend.

Because of the GPS equipment, the researchers know exactly where the payload came down; its latitude and longitude coordinates are 65.06421 degrees north and 148.50345 degrees west. Project Aether: Aurora invites any adventurous souls to go out and find it, along with any of the other five balloons the team wasn't able to retrieve.

If you do locate any of these fallen balloons, you can keep the GoPro camera, Longmier says — as long as you mail him the camera's SD memory card and the payload's GPS equipment. (Contact him at blongmier@uh.edu for shipping details.)

And if you rescue the SPACE.com T-shirt from its backcountry grave, you're welcome to keep it, too. But please email us a few pictures of the shirt as it lay when you found it, and a few of you wearing it as well. You may want to warm it up in the dryer first.