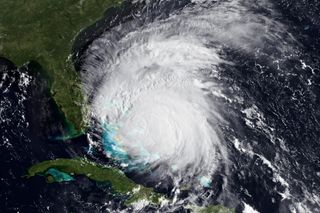 Hurricane Irene is pictured over the Bahamas on August 25, 2011
(Image: © NOAA/NASA)

The name "Irene" has been retired from the list of Atlantic Basin hurricane names, because of the damage Hurricane Irene caused when it hit the Caribbean and U.S. East Coast last year, the World Meteorological Organization announced today (April 13).

Storm names are decided on by the WMO and run on a seven-year cycle (so the list of names used in 2011 will be used again in 2017) in the Atlantic Basin and eastern North Pacific Basin, unless retired for causing a considerable amount of casualties or damage. Irene is the 76th hurricane name to be retired from the Atlantic list since 1954, according to a statement from the National Oceanic and Atmospheric Administration.

Irene will be replaced on the list with "Irma."

Irene became a hurricane on Aug. 22, 2011, and intensified to a Category 3 hurricane on the Saffir-Simpson scale of hurricane strength on Aug. 24 while positioned between Mayaguana and Grand Inagua in the Bahamas. It then gradually weakened and  made landfall in North Carolina on Aug. 27 as a Category 1 hurricane. Irene was the first hurricane to make landfall in the United States in three years.

Irene then drifted back out over the ocean and made a second landfall the following day near Atlantic City, N.J.  Later that day, the center of the storm, now much weakened, moved over Coney Island and Manhattan in New York.

Irene caused widespread damage, both in North Carolina and across the mid-Atlantic and Northeast as its rains caused catastrophic inland flooding in New Jersey, Massachusetts and Vermont.

Irene was directly responsible for five death in the Dominican Republic, three in Haiti, and 41 in the United States. For the United States, six deaths are attributed to storm surge/waves or rip currents, 15 to wind, including falling trees, and 21 to rainfall-induced floods, according to NOAA.