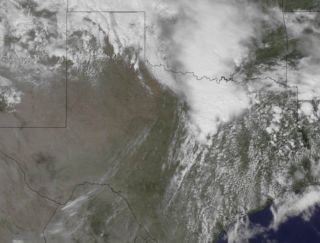 The conditions that caused the devastating tornadoes that ripped through Texas yesterday (April 3) are typical for the season, meteorologists say — it was bad luck that brought them through some of the most populated areas of the state.

"A storm system over the Four Corners region is pushing into Texas ," Frank Strait, an Accuweather meteorologist, said yesterday while the storms were still raging. "There's a cold front that’s trailing this storm over Texas, and that's one of the factors that's causing thunderstorms to form."

At least six tornadoes ripped through the Dallas-Fort Worth area from midafternoon into the early evening, according to the National Weather Service.

Survey teams headed out today to assess the damage, some of it caused by large hailstones. No fatalities were reported immediately, but 15 people were known to be injured, two of them seriously.

Tractor-trailers were thrown in the air like Matchbox cars. More than 650 houses throughout the region were damaged, as was the Six Flags amusement park in Arlington, ABC News reported.

Hundreds of flights were rerouted or canceled, and hail damaged 110 aircraft at the Dallas Fort Worth International Airport. [Images: Today's Dallas Tornadoes]

The storm system created hailstones wider than 2 inches (5 centimeters) in some areas.

"When you have strong thunderstorms that are producing tornadoes, it's fairly normal to see large hail," Strait told OurAmazingPlanet. Those types of wind and storm conditions "can keep a heavier hailstone aloft longer, and they grow to a much larger size before they start falling."

While such storms are relatively common this time of the year, it's uncommon that they plow through major metropolitan areas. The last time the area including Fort Worth and Arlington was hit by strong tornadoes was in 2000.

Two competing systems over Texas led to wind shear, which happens when the air moves in different directions at different heights in the atmosphere. The winds at the surface in the Dallas area were out of the southeast; meanwhile, the winds 2,000 feet (610 meters) higher may have been blowing south, while 3,000 or 4,000 feet (900 to 1,200 m) farther up, they may have been out of the southwest.

"When you have the wind changing direction that way, that's a high shear environment, and when you have a thunderstorm form in that kind of environment, that starts rotating and that can cause a tornado to form," Strait explained.

This round of tornadoes came 12 years after a historical bout of storms that raged through Fort Worth and Arlington March 28, 2000, injuring 80 and killing two.

"It's fairly common to see a storm system like this occur this time of year," Strait said. "The only thing that's kind of different about the tornadoes is that they were hitting a populated area this time."

"It's springtime across the southern states; you are going to get frequent bouts of severe weather, and there will be tornadoes that are spawned by this type of storm system across this area of the country," Strait said. "Because not a large part of the landscape is covered by cities, you don't see tornadoes hitting them that often."