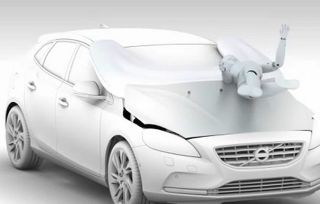 Volvo's world-first airbag inflates to cover the area under the raised hood plus approximately one third of the windscreen area.
(Image: © Volvo Car Corporation)

Volvo has come out with the world's first commercial airbag designed to protect pedestrians rather than drivers in a car accident. That's just one of many smart safety features on display in its latest model of the Volvo V40 compact car.

The pedestrian airbag inflates across one-third of the windshield and raises the back of the car hood as soon as the bumper detects a collision with a person. Such technology could cut down on lethal encounters between humans and cars that lead to U.S. pedestrians making up 12 percent of all traffic fatalities — a sobering statistic that is over 25 percent in China.

"The all-new V40, the most compact car in our V-range, has class-leading safety," said Thomas Broberg, senior safety advisor for Volvo. "It is also packed with more intelligent support systems than any previous Volvo. Yet another important step toward our vision that nobody should die or suffer serious injuries in a new Volvo car by the year 2020."

Volvo only plans for the airbag to act as a last defense against injuring or killing pedestrians. Its car also represents the first in its vehicle class to include a "pedestrian detection" system that warns the driver with a loud noise and flashing light if it's headed toward a person. Even if the driver fails to respond in time, the car can automatically hit the brakes.

That system uses radar to detect pedestrians in front of the car and predict whether he or she will step in the car's path. A similar "collision warning" system can also apply the brakes if it detects the driver is headed toward a probable car crash, and can avoid disaster even with vehicle speed differences of up to 22 mph (35 kph).

Volvo's cars don't rival the smarts of Google's self-driving car just yet. But they do include intelligent systems capable of making the driving experience both more pleasant and less dangerous.

"The safety systems are intelligent and work together to make driving more pleasant and safe," Broberg explained. "They are designed to warn about threats. If necessary, they can also step in and intervene in critical situations. And, in some situations where the collision is unavoidable, there are safety features to help mitigate the consequences."

Volvo's new car also includes its driver alert control system that uses a camera and sensors to gauge how well a driver is staying between road lane markings. If the system senses unsafe driving patterns, it alerts the tired driver with a sound and a lit-up coffee cup symbol suggesting a roadside break.

The car can help out timid drivers by finding big-enough parking spots and automatically steering during parallel parking on a city street. The driver gets step-by-step directions and animations and only needs to control the speed of the car as it steers itself into a perfect parking job.