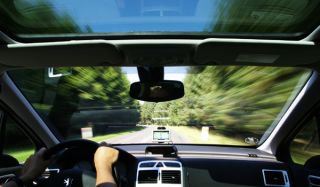 Everything is bigger in Texas even the speeding limit. The Texas House of Representatives has approved a bill that would raise the speed limit to 85 miles per hour on some highways, with the bill now making its way to state Senate. But the increased limit may have deadly consequences, as research shows that higher speeds result in more fatal accidents.

Currently, Texas has more than 520 miles of interstate highways that have 80-mph speed limits. The new bill will permit the Texas Department of Transportation to raise the speed limit of certain roads after the areas have been assessed by traffic engineers. Upping Texas' 80- mph limits to 85 will make the lone star state have the highest speed limit in the nation.

The 85-mph limit will most likely be applied to lengthy, flat rural roads . But the convenience of faster-moving traffic comes with major risks, according to Russ Rader, a representative for the Insurance Institute for Highway Safety. Simply put, raising speed limits increases fatal accidents.

"There's a direct correlation between higher speed limits and more serious crashes on these roads. That's the trade-off," Rader told Life's Little Mysteries. "Political leaders and traffic engineers have to decide on whether they want that trade off."

In 1995, Congress passed the National Highway Designation Act, which removed all federal speed limit controls. Although the national speed limit had previously been set at 55 mph and 65 mph in some rural areas each state was now allowed to raise or lower its speed limits as state officials saw fit.

A 2009 study published in the American Journal of Public Health analyzed the long-term effects of the 1995 act. From 1995 to 2005, there was a 3.2 percent increase in road fatalities attributable to higher speed limits on all road types, with the highest increase 9.1 percent occurring on rural interstates. Researchers estimated that 12,545 deaths were attributed to increases in speed limits across the U.S. during that time.

Raising speed limits also increases fuel consumption , with every 5 mph driven over 60 mph equating to paying an additional $0.24 per gallon for gas, according to the U.S. Department of Energy.

"It costs lives and it costs energy at a time when we should be reducing energy use," Rader said. "What we really should be doing is lowering speed limits, which would have the benefit of both saving lives and saving fuel."