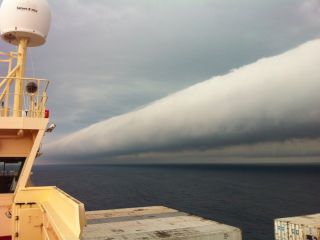 A roll cloud, associated with thunderstorm downdrafts and strange sea winds, tumbles across the sky off the coast of Brazil. Roll clouds are rare and harmless, though ominous-looking.
(Image: © Capt. Andreas M. van der Wurff )

A photo taken near Brazil captures a rare and beautiful "roll cloud," a tubular cloud that seems to tumble across the sky.

Roll clouds are a type of arcus cloud, which is a category of low cloud formations. Their more common cousin is the shelf cloud, often seen on the leading edges of thunderstorms. Roll clouds sometimes form along with storms, too, born out of the storm's downdraft. Sinking cold air causes warm, moist air on the planet's surface to climb to higher altitudes, where the moisture condenses into cloud form. Winds from the storm "roll" the cloud parallel to the horizon, creating an effect that looks much like a horizontal tornado. Unlike shelf clouds, rolls clouds are completely detached from the bulk of the storm. [Gallery of Curious Clouds]

Roll clouds aren't dangerous in themselves, though, and many roll clouds form in relatively calm weather as a result of sea breezes. One of the most famous spots for these coastal roll clouds is off the coast of Queensland, Australia, where the so-called Morning Glory roll cloud forms regularly in fall months.

This roll cloud photo was taken by Capt. Andreas M. van der Wurff from a ship en route from Paranagua, Brazil, to Montevideo, Uruguay, on Feb. 6.

Roll clouds are just one of the weird weather phenomenon that can happen when winds go wild. Wave clouds, for example, look like ripples in the sky. They occur when a large landmass such as a mountain forces an air mass to rise to cooler altitudes, where the moisture in the air condenses. The air then drops like a wave, leaving a cloud to mark its peak.

Even more stunning are lenticular clouds, which are so smooth and round that they're sometimes mistaken for UFOs. They too form because of the vagaries of winds around mountain peaks.