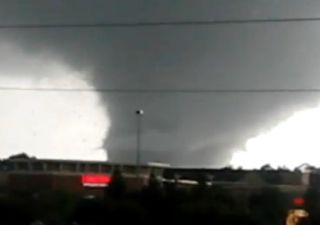 A screen shot of the video that captured the sideways twister.
(Image: © Jason835a/YouTube.)

A rare sideways tornado was captured on video as it spun off of a massive twister that roared through downtown Tuscaloosa, Ala., yesterday (April 27).

Just how rare are these sideways spinners?

"There's not even a settled-upon name for those," said Bob Henson, a meteorologist with the National Center for Atmospheric Research in Boulder, Colo.

Sideways funnel clouds are usually seen only with the biggest and baddest of tornadoes, and yesterday was no exception, Henson told OurAmazingPlanet. The huge tornado  may have carved a path from downtown Tuscaloosa to downtown Birmingham, about 60 miles (97 kilometers) apart. The tornado appears to be a mile wide and seemed to be on the ground for more than two hours.

The exact death toll from this monster is unknown, but statewide, tornadoes killed an estimated 162 people, CNN reported.

These huge tornadoes are spinning so fast that some of that spin is shed, spawning sidekicks. That's about as much as scientists know about these sideways funnel clouds. They're too small to be replicated or studied in the lab. And despite forming from long-lasting tornadoes, sideways funnel clouds are fleeting, lasting maybe 20 seconds before dissolving, as the video shows.

A multiple vortex tornado is one that packs several vortices inside the main vortex. These extra funnels usually come in groups of two to five and last only a few minutes. Multiple funnel clouds are usually visible only early in a storm before they break off into tornadoes of their own.

A storm's circulations can only live up to a certain size and intensity, then it splits into two, three or four tornadoes, meteorologist Mike Smith, chief executive officer of Weather Data Services, a part of AccuWeather, told OurAmazingPlanet.

A multivortex tornado is hard to confirm without video. A signature of a multivortex tornado is intense damage where these funnel clouds touch down, and lesser damage where only the winds of the parent tornado swept through, according to the Storm Prediction Center in Norman, Okla. This often creates a hit-or-miss pattern of destruction in the tornado's path. [The Tornado Damage Scale in Images]

Sideways funnel clouds are even harder to spot without video because they don't touch the ground.