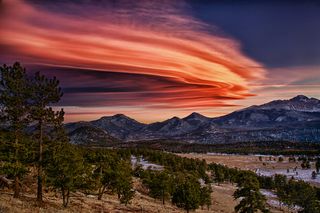 This spectacular, multi-hued formation of lenticular clouds was observed soon after the sun set over Rocky Mountain National Park near Estes Park, Colo., on Jan. 5.

Professional photographer Richard H. Hahn was on the south side of the park's Deer Mountain when he noticed the unique cloud formation in the dusk sky. He rushed to find a shooting angle that would place the colorful clouds in the context of the valley and mountains, and he snapped the magnificent view at 5:02 p.m. MST (7:02 EST).

"The great colors lasted only a few minutes, so it was a lucky observation," Hahn told OurAmazingPlanet. "I felt very grateful to be in a high-enough elevation with a favorable shooting angle to capture this scene with perspective."

Lenticular clouds are characterized by their smooth, symmetrical oval or round shapes, and because of this, they are often referred to as "flying saucer" or "UFO" clouds. They can appear near the lee side of a mountain ridge, which is the portion of the mountain sheltered from winds.

"I have seen quite a few interesting lenticulars during my nine years in Colorado, but never one quite like this," Hahn said. "The significance of this particular atmospheric event was the dramatic shape and color of the cloud. It really did look like the mothership UFO."

Lenticular clouds form when waves of moist, fast-moving air are pushed upward by winds and ascend over high mountains. At the mountain's higher altitude, the moist air's water droplets cool and expand, and the water vapor condenses. When the air moves over the mountaintop and descends to uniformly humid conditions, lenticular clouds form.

They can look like one large, lens-shaped cloud, or several waves of moist air can result in lenticular clouds that resemble pancakes stacked atop each other, like the ones in this photo.

Because the photo was taken about 20 minutes after sunset, Hahn explained that the cloud's beautiful pink, orange and melon colors required a clear sky between the lenticular cloud and the western horizon. The setting sun's rays were able to reach the high-hanging cloud.

"The air was dead quiet at my location, which is a big contrast to the high-velocity winds implied by the lenticular cloud at higher altitudes," Hahn added. "It was ominous and breathtaking."