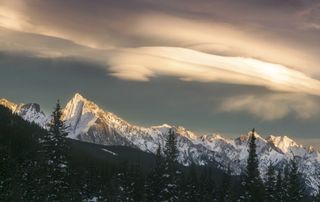 Chinook winds cause an interesting cloud formation as they blow over the Rockies in Banff National Park in Alberta, Canada.
(Image: © Autumn Sky Photography/Shutterstock)

In the cold winter months of regions east of the Rocky Mountains, a strong, dry, warm wind sometimes blows from the mountains across the land. These winds, known as Chinook winds, can bring quick temperature changes.

Chinook winds are named for the Chinook Native Americans who lived in the coastal regions of Washington and Oregon near the Columbia River, according to Chinook Nation. Winds similar to Chinook occur all over the world and are known by several local names. In the European Alps, they are called föhn winds, wrote Emma Quaile, a British scientist, in a 2001 article in the journal Weather. In central Asia, they are afganet; in the Andes of South America, these winds are called puelche; and in southern California, they are known as the Santa Ana winds.

Chinook winds develop when warm, moist air blows from the Pacific Ocean in the northwest region of North America toward the Rocky Mountain range, according to Rocky Mountain National Park. The air mass cools as it climbs the mountains, bringing rain or snow to the peaks. The air mass, now dry after releasing its moisture in the mountains, warms as it moves down the eastern side of the mountains. The air mass warms rapidly, eventually becoming warmer and drier than the original air mass coming from over the Pacific Ocean. When the winds suddenly change direction toward the west or southwest, the Chinook winds begin with rapidly increasing speeds.

Chinook winds can be as much as 50 degrees Fahrenheit (10 decrees Celsius) warmer than the air they displace, according to Indiana Public Media's Moment of Science. Temperatures rise approximately 5.5 degrees F per every thousand feet the air mass descends down the mountain. The gusts can also reach up to 80 mph (128 km/h) as the winds come down the mountains and pass over the plains.

When the warm, dry, fast-moving Chinook winds pass over snow-covered areas, the snow often vaporizes before it has a chance to melt, according to the U.S. Geological Survey. According to the Weather Doctor, the winds can easily vaporize a foot of snow within hours. Because of this, chinook winds are often known as the "snow eaters."

An extreme example of a Chinook wind was recorded in South Dakota in January 1943, according to Black Hills Weather. The recorded temperature at 7:30 a.m. was minus 4 F (minus 20 C) and when the Chinook winds began shortly after, the temperature increased 49 degrees F (7 degrees C) in just two minutes and by 9 a.m., when the Chinooks died down, residents were experiencing 54-degree (12 C) weather. When the winds died down, it took 27 minutes for the temperature to drop 58 degrees, back to where it was in the morning.

There are several legends about the origins of the Chinook winds. In one story, recorded by Ella E. Clark in Indian Legends of the Northern Rockies, Thunderbird punished the people who lived in her valley after a careless campfire destroyed all life there. She sent the cold Northeast Wind to drive the people from the valley.

However, her daughters Crow, Magpie and Bluejay went with the people, and Thunderbird became lonely. So she asked the Northeast Wind to leave, and invited the Chinook Wind to warm the valley. Life returned, as did the people and Thunderbird's daughters. Thunderbird asked Bluejay what she could give to her to show her gratitude.

"In the future, Dear Mother," Bluejay said, "do not get so angry. It is not right that the considerate people should suffer for the offenses of the careless."

So, the Northeast Wind returns to the East Pass each winter to remind us to live a thoughtful life, but he always returns to his home when the Chinook Wind comes back to stay in the spring.

Another story, from Myths and Legends of British North America and recorded by Katharine Berry Judson, involved two brothers, Fox and Hare, and their journey to bring warmer weather to their people who lived in very cold conditions. The brothers traveled south to the land where people lived in sunshine and warmth and they released the Chinook wind from a bag and it flowed to the land of the cold bring warmth and new life to the region.

Chinook winds can also have a devastating effect on vegetation. Soil can lose its moisture and its mass as water and soil are carried away by the high-speed winds, according to Mountain Nature. Trees and other plants may wake up from their winter hibernations early only to become dehydrated if they survive the rapid temperature fluctuations.

And while the Chinook winds can melt the snow, uncovering grass for grazing animals, they can also melt the insulation provided by the snow that is protecting hibernating animals, according to Mountain Nature. There have also been incidences of cattle coming down with illnesses, and some cattle have been electrocuted after wire fences became electrified due to strong positive electrical charges in the air.

According to the Weather Doctor, fire risk increases with the Chinook winds because of the heat and arid conditions. The slightest spark can cause a major wild fire. Two fires in the same area around Boulder County, Colorado, burned 19 years apart and both were fueled by the Chinook winds, according to Boulder County. The first Olde Stage Fire in 1990, fanned by 80-mph winds, burned about 3,000 acres (1,214 hectares), destroying 15 buildings and damaging many others. The second Olde Stage Fire in 2009 also burned about 3,000 acres while being fueled by 60-mph winds. Several buildings were destroyed and many others threatened.

Chinook winds have been blamed for increases in several medical conditions including migraines, strokes, and even sudden infant death syndrome. But the research has not resulted in clear evidence of a correlation.

Several studies have attempted to correlate migraine occurrences with the Chinook winds. In a small study in 1992, published in the journal Headache, researchers analyzed the diaries of 13 migraine patients in Calgary, Alberta. The probability of migraines was slightly greater on days with Chinook weather than on days without Chinook wind, and older patients were more likely to get migraines on those days.

In 2010, one of the authors of the Calgary study, W.J. Becker, discussed other studies in an article in the journal Cephalalgia. Becker noted that many studies have shown little to no statistical correlation. Becker, however, does think there may be a correlation but there is great difficulty in proving statistical correlations. Becker gives several reasons to support his claim, including multiple migraine triggers, a single versus several triggers leading to a migraine, weather related factors, and timing. The author wrote that migraine patients should first and foremost be listened to and that more research into understanding the various factors that could lead to migraines needs to occur.

Several research teams have studied the relationship between strokes and the Chinook winds. One such study, by Canadian neurologists Thalia Field and Michael Hill, published in the journal Stroke in 2002, recorded data such as hourly wind, temperatures, humidity and barometric pressure over a five-year period and compared it to the number and types of strokes that occurred in Calgary. Although the authors didn't find a correlation between the number and type of strokes and the Chinook winds, they do discuss potential reasons that could affect the data, including other factors such as cigarette smoking, climate-controlled homes during cold winter months, people who did have a stroke that didn't go to the hospital or went to a different one, and the exact time of the onset of the stroke not being readily available to the authors. There were also potential biases due to negative studies not being published, according to the authors.

A study published in 1999 by Macey, Schluter, and Ford, pediatric doctors and researchers from New Zealand, in BMJ, focus their research on sudden infant death syndrome (SIDS) and the Föhn winds in New Zealand. They relate their research to various places that experience similar wind phenomena around the world, such as the Chinook winds across the United States and Canada. The researchers looked at a 22-year period in which there were 646 known cases of SIDS in Christchurch. The authors concluded while there is evidence that SIDS may be connected to several environmental factors, the Föhn winds did not appear to be an additional cause.