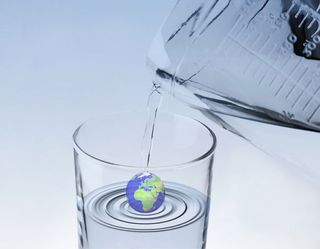 ERIE, Pa. (AP)—An Erie cancer researcher has found a way to burn salt water, a novel invention that is being touted by one chemist as the "most remarkable" water science discovery in a century.

John Kanzius happened upon the discovery accidentally when he tried to desalinate seawater with a radio-frequency generator he developed to treat cancer. He discovered that as long as the salt water was exposed to the radio frequencies, it would burn.

The discovery has scientists excited by the prospect of using salt water, the most abundant resource on earth, as a fuel.

Rustum Roy, a Penn State University chemist, has held demonstrations at his State College lab to confirm his own observations.

The radio frequencies act to weaken the bonds between the elements that make up salt water, releasing the hydrogen, Roy said. Once ignited, the hydrogen will burn as long as it is exposed to the frequencies, he said.

The discovery is "the most remarkable in water science in 100 years," Roy said.

"This is the most abundant element in the world. It is everywhere," Roy said. "Seeing it burn gives me the chills."

The scientists want to find out whether the energy output from the burning hydrogen—which reached a heat of more than 3,000 degrees Fahrenheit—would be enough to power a car or other heavy machinery.

"We will get our ideas together and check this out and see where it leads," Roy said. "The potential is huge."