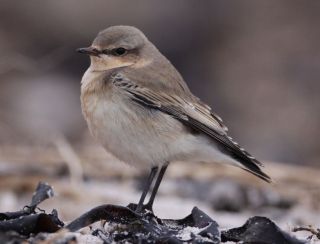 The northern wheatear (Oenanthe oenanthe) weighs no more than 2 tablespoons of salt and can make roundtrips spanning some 18,000 miles.
(Image: © Heiko Schmaljohann.)

Tiny songbirds weighing no more than two tablespoons of salt apparently globe-trot regularly from the Arctic to Africa, crossing either Asia or the Atlantic to do it, scientists find.

Researchers had known the northern wheatear (Oenanthe oenanthe) had one of the largest ranges of any songbird in the world, with breeding grounds extending from Alaska and extreme northwestern Canada across northeastern Canada and into Europe and Asia. The insect-eating birds apparently leave the Arctic region of the Western Hemisphere for the winter, but it was a mystery as to precisely where they migrated.

Now, using light-sensing tags strapped onto these songbirds, investigators find these birds overwinter in sub-Saharan Africa. Their one- to three-month voyages can reach distances of up to 9,000 miles (14,500 kilometers), covering up to 180 miles (290 km) per day.

"This is the only known terrestrial bird that physically links the two radically different ecosystems of the Old World and the Arctic regions of the New World," said researcher Ryan Norris at the University of Guelph in Canada.

Until recently, details about songbird migration remained unknown because geolocators, which work by measuring light levels (and thus latitude and longitude), were too big or heavy to attach to birds weighing only 25 grams on average. Researchers looped new, 1.2-gram devices onto the legs of the birds to track them.

"It is probably not a big deal for the wheatears to carry this extra weight," said researcher Heiko Schmaljohann, an ornithologist at the Institute of Avian Research in Germany. The birds actually double their body mass during the migration to store up energy for arduous stretches, "especially in front of barriers like the Atlantic or the Sahara."

The investigators tagged 46 adult northern wheatears in the summer in the Arctic — 30 at Eagle Summit in Alaska and 16 at Baffin Island in northeastern Canada — and let them migrate to wherever they were going.

The songbirds apparently follow two routes across ocean and desert from the Arctic to Africa. In one, birds of northeastern Canada cross a 2,175-mile (3,500 km) stretch of the North Atlantic, land in the United Kingdom, travel southward across Europe, and migrate across the Mediterranean and the Sahara to western Africa. [Album: Earth's Greatest Migrations]

"The North Atlantic was crossed at about 850 kilometers (530 miles) per night," Schmaljohann said. It remains unclear whether this voyage across the ocean was non-stop — "the bird could have made a stopover on Greenland," he noted. A good tailwind of 30 to 45 mph (50 to 75 kph) may have helped, too.

"Think of something smaller than a robin but a little larger than a finch raising young in the Arctic tundra and then a few months later foraging for food in Africa for the winter."

After they migrate, the birds fly back the way they came, for an up-to-18,000-mile (29,000 km) round trip, one of the longest migratory journeys of any bird in the world ? "particularly for a bird this size," Norris said.

The investigators managed to retrieve four of the geolocators when the songbirds returned to the Arctic. The researchers also analyzed winter-grown feathers from the birds sampled in the Arctic. Chemical signatures in the feathers helped confirm where they'd been.

Franz Bairlein at the Institute of Avian Research in Germany, supervisor of the study, said, "These results will have an influence on the understanding of migration and will surely affect future attempts to model bird migration."

Considering the distances albatrosses and arctic terns migrate — about 50,000 miles (80,000 km) a year — "it seems that birds' migration performance is actually limited by the size of the Earth," Schmaljohann said.

The scientists detailed their findings online Feb. 15 in the journal Biology Letters.