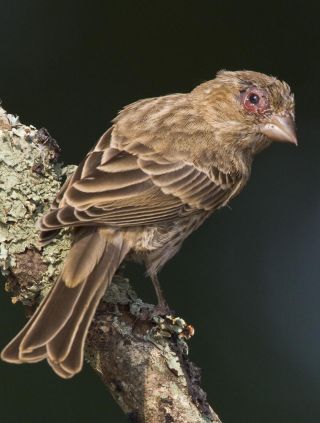 The red, swollen, crusty eyes in this house finch are the result of a highly-contagious infection caused by the bacterium Mycoplasma gallisepticum.
(Image: © Photo by Geoffrey E. Hill.)

The bacteria responsible for the red, swollen, crusty eyes of a sick house finch, which can leave it unable to survive, evolve at an exceptionally fast rate — which is both bad and good news for the future of the songbird, researchers say.

The fast evolution means the bacteria can keep up with their hosts' immune systems. However, in the process of evolving, the bacteria have lost genes that may protect them from viruses. That's a weakness scientists could take advantage of to get rid of the bacteria, which have led to the death of thousands of house finches in the wild since the bacteria jumped species and started an epidemic in the 1990s.

The tiny bacteria, Mycoplasma gallisepticum, infected poultry before it adapted to the house finch population. The researchers analyzed several samples of the bacteria from different years of the epidemic (the mid-1990s, 2001 and 2007) and compared them with strains isolated from chickens and turkeys. They were able to determine that the bacteria likely jumped from the turkey population, a possibility that other researchers had suggested. [10 Deadly Diseases That Hopped Across Species]

By analyzing genetic sequences, researchers discovered that the bacteria mutated 10 to 100 times more quickly than other species of bacteria, seemingly giving them an evolutionary advantage.

"We were surprised at what a high rate it was; it's higher than most published estimates and on par with just a few estimates out there," study researcher Scott Edwards, of Harvard University, told LiveScience.

That wasn't all that was hiding in the bacteria's genome, however: "We were surprised to find that the bacteria's own immune system against viruses and phage was evolving," Edwards said. "The bacteria lost about 50,000 base pairs [of DNA]; as a result of this, it loses some functions that were formerly advantageous" — such as its ability to fight off viruses.

The researchers said they aren't sure whether the loss of key immune-system genes was an artifact from the bacteria's move to the new host (perhaps the small population of bacteria that started the epidemic had already lost their immunity genes) or whether they lost them along the way because it somehow gave them an advantage in the house finches.

A bacterium's immune system defends against viruses called phage. Without the immunity, a virus could attack unimpeded and kill the bacterium. Researchers say the mycoplasma may no longer be able to fight off phage, though the researchers don't know enough about such viruses to really say what would make a good weapon.

"Who knows, maybe we could enlist some viruses to get rid of them," Edwards said. "That's one of the next things we want to do, look at how this loss of the immune system in the bacteria affected its susceptibility to phage."

The study was published today (Feb. 9) in the journal PLoS Genetics.