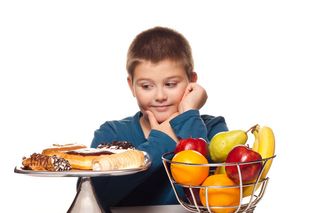 The study revealed that students attending school in the suburbs had greater access to unhealthy snacks.
(Image: © Tom Burlison | shutterstock)

When it comes to offering healthier food choices to children, urban schools may do better than suburban schools, according to a new study.

The study also found that public schools may offer a greater number of healthy choices than private schools, and that low-fat products were more likely to be available at larger public schools than at smaller ones.

Researchers at the University of Illinois at Chicago collected data using a nationally representative survey of 2,647 public and 1,205 private elementary schools between 2006 and 2010.

The findings revealed that students attending school in the suburbs had greater access to unhealthy snacks. In suburban schools, 53.2 percent of students had access to food in vending machines, school stores or snack bars, compared with 44.2 percent in urban schools.

Such options generally give students more access to unhealthy foods than they would have if they have fewer other options besides buying food though the U.S. Department of Agriculture's school meal program, according to the study.

Which schools were more unhealthy?

Whether a school was public or private also played a role in students' snack options, the researchers found. Private school students had more snack bars on campus, and candy and salty snacks were more available to them than to public school students.

The study noted some regional diversity: Public school students in the South had more access to vending machines and snack bars, along with greater access to salty and sweet products, than students in other regions of the United States.

But more vending machines and snack bars doesn't have to mean more unhealthy snack options — public school students in the South also had a greater availability of healthier foods, including fruit, vegetables and low-fat dairy products, compared with students in the Midwest or the West. The researchers called these results "intriguing" because childhood obesity rates are highest in the South.

The study authors cited a 2007 Institute of Medicine report which noted that school meal programs should be the primary source of nutrition in schools, and there should be only limited access to other foods.

The report emphasized that when vending machines and snack bars are available, they should include fruit, vegetables, whole grains and low-fat dairy products as options.

"Because children spend many hours in school, changes are needed to make the school environment healthier by limiting the availability of less healthy food products," the researchers wrote.