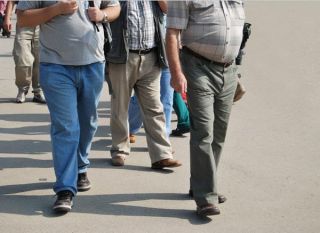 The steady increase in U.S. obesity rates over the past 20 years seems to be leveling off, according to a new study from researchers at the Centers for Disease Control and Prevention.

Researchers analyzed new data gathered during the National Health and Nutrition Examination Survey in 2009 and 2010, and defined obesity having as a body mass index of 30 or greater.

"The good news is that the [obesity] rate hasn't grown much," said Michael Zemel, a professor of nutrition science at the University of Tennessee, who was not involved with the work.

"But we still have an awful prevalence of obesity and overweight," Zemel said.

The study appears today (Jan. 17) in the Journal of the American Medical Association.

Although more people are consuming more calories than ever before, Zemel said there's a greater awareness now, compared with a couple of decades ago.

"Twenty years ago, the general public and the medical community had little awareness about obesity," he said. "Doctors weren't discussing obesity with their patients like they do now."

Reasons why rates may have leveled off are unknown. But Zemel said he hopes that public awareness and small lifestyle changes have had an impact.

Slight increase in obesity for men

While the overall rates remained constant, certain groups did see some small increases in their obesity rates. A slight increase, about 4 percent, was found in men, between 1999 and 2010.

For women, the rate was 32 percent among white women, compared with 59 percent among black women. From 1999 through 2010, there was no increase among women overall, but small increases, about 3 percent, were seen in the obesity rates of black and Mexican American women.

Even smaller decreases in other groups offset these increases, leading to a relatively steady rate overall, according to the report.

"People should know that there's been no sign of a decrease, but there hasn't been much of an increase since 2003 either," said lead author Katherine Flegal, an epidemiologist at the CDC. "So it's pretty stable."

A related NHANES report also published today found the obesity rate in children remained the same from 2007 to 2010. Nearly 17 percent of children and teenagers ages 2 through 19 were either overweight or obese, according to the analysis of about 4,100 children.

About 10 percent of infants and toddlers weighed too much for their height in 2010, that report also showed.

Obesity continues to be higher among black and Hispanic children compared with white children, according to the report.

Although study authors noted that many efforts at the national, state and local levels have focused on reducing obesity, they point out "results from the survey still show that childhood obesity remains unchanged."

Pass it on: Obesity rates hit a plateau in the U.S.