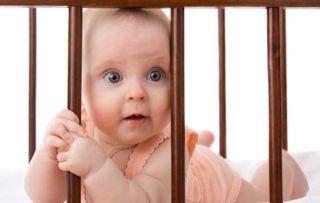 Early signs of childhood obesity could be detected in the weight gains of infants as young as 6 months old, suggests a new study.

The risk of obesity at ages 5 and 10 was highest for children who made a two-percentile jump during their first 6 months of life, said Dr. Elsie Taveras, co-director of the Obesity Prevention Program at the Harvard Medical School and lead author of the new study.

"This goes against the common perception that early weight gain is normal, and it's just due to baby fat that will eventually go away," Taveras said.

During every well-child visit, pediatricians record the weight and length of their young patients. By comparing these measurements to the Centers for Disease Control and Prevention's weight-for-length growth charts, pediatricians can screen for early abnormalities in weight.

Previous studies have found that children ages 5 to 10 are more likely to be overweight if their weight-for-length was above the 95th percentile at any time during their infancy, Taveras said. But no studies have looked at how changes in an infant's weight-for-height during early life affects their childhood obesity risk.

For the new study, Taveras and her team reviewed the weight-for-length records of 44,622 children under 11 years old who had well-child visits at one of 14 health centers in eastern Massachusetts from 1980 through 2008.

The researchers found that 11.6 percent of the children were obese (had a body mass index at or above the 95th percentile for their age and sex) at the age of 5, and 16.1 percent were obese at age 10. Unsurprisingly, babies who were overweight at any time during their first two years were more likely to be obese at age 5 or 10 than their normal-weight counterparts, with higher infant weight-for-length percentiles being associated with higher rates of childhood obesity.

"But excess weight-for-length gain in the first 6 months of life was particularly risky for the children," Taveras said.

For example, of babies whowere between the 75th and 90th percentile at 1 month old, and rose two or more percentiles within their first 6 months of life, 32.9 percent were obese at age 5. If those infants crossed those same percentile lines between 6 and 12 months of age, the chance of obesity at age 5 was slightly lower, at 29.7 percent.

Children who are obese are at a high risk for a number of health issues, including Type 2 diabetes and hypertension. "If we could screen children earlier, then we could prevent seeing a 5-year-old that's obese," Taveras said.

At the very least, Taveras said that high weight-for-length gains should prompt conversations between parents and pediatricians, and investigations into why the infant is growing so rapidly.

After that, parents might employ several strategies to prevent a child from becoming obese, including breast-feeding the children for as long as possible, avoiding sugary beverages and giving babies more opportunity to move.

The new study was published today (Nov. 7) in the journal Archives of Pediatrics and Adolescent Medicine.

Pass it on: Rapid weight-for-height gain within the first two years of life may predict childhood obesity.