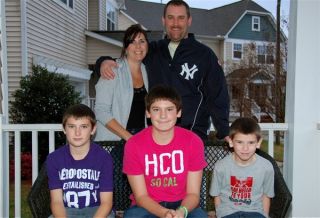 Michelle Morton (top, left), her husband Bill (top, right), and her sons Noah, 11; Jacob, 15; and Luke, 7 (from left to right). Morton tries to buy healthy foods for her family to eat as much as she can, but a busy schedule can make it difficult to eat well for every single meal of the day.
(Image: © Michelle Morton)

Health experts say diets of children in the United States have deteriorated dramatically over the past two generations, leading to skyrocketing rates of obesity and diabetes, both of which put children at risk for other diseases and shorter lives. But as many parents know, eating healthy isn't always easy, especially when you're a mom of three growing boys, says Raleigh, N.C.-resident Michelle Morton.

Morton, who is a professional organizer, tries to buy only healthy foods from the grocery store for her 15-, 11- and 7-year-old sons. But it's challenging especially in the mornings, when she is trying to get all her kids out the door in time for school and not everyone is a fan of instant oatmeal.

"It's the time of the day when you have the least amount of time, so you're like, 'OK, so we had to eat Fruit Loops today,'" Morton told MyHealthNewsDaily. "That's been the hardest for me."

Morton tries to keep her kids from eating junk food by keeping only healthy snacks in the house, such as fruit, yogurt and cheese. She will let them have the occasional brownie or toaster pastry from time to time, but usually saves them for special occasions.

But as much as she encourages healthy eating, kids are always attracted to the junk, she said.

"They tend to always want that stuff, or at least that's the way it is at my house," Morton said. "It's always hard to try to find that balance to teach them to eat healthier and why to eat healthier, but at the same time not completely depriving them. They're just always attracted to it."

Health experts say the occasional treat is acceptable, as long as it is not in large quantities and not a daily ritual. But for kids who already have poor eating habits early in life, their sweet tooth is not wholly to blame — they are attracted to those foods because they learn at home and at school that they are OK to eat, said Eileen Kennedy, a pediatric psychologist at the Cleveland Clinic in Ohio. [Tips to Promote Healthy Eating for Kids]

Today, 17 percent of all kids and teens are obese, which is triple the rate of one generation ago, according to the Centers for Disease Control and Prevention.

The American diet is likely not helping any. One study published in 2000 in the American Journal of Clinical Nutrition found the average American gets 27 percent of his or her total daily energy from junk foods. Most people don't realize how bad it's gotten. Some 90 percent of Americans reported eating a healthy diet in a recent Consumer Reports survey, though their weight and other factors suggest that's not the case.

"So many people think that what they're eating is healthy — diet frozen dinners, fat-free ice cream, 100-calorie pretzel packs. Or they say,  'I never eat fast food,' but that doesn’t mean they're not eating a lot of other unhealthy things," Molly Kimball, a registered dietitian at Ochsner's Elmwood Fitness Center in New Orleans, said of that survey.

And this isn't a light topic: Obesity puts kids at higher risk for a slew of health issues, including diabetes, heart disease and even cancer. Already, about 151,000 children under age 20 have type 1 or 2 diabetes. And in the last two decades, type 2 diabetes — formerly known as adult-onset diabetes — has been reported among U.S. children and teens with increasing frequency, according to the CDC.

It's not necessarily that parents are trying to fatten their kids up with junk food and fast food, said Kennedy, the pediatric psychologist. Rather, it has to do with convenience and lack of meal planning.

"We have such a widespread availability of fast-food options, that it is just a flat-out convenience for very busy families," Kennedy told MyHealthNewsDaily.

There is also a general lack of importance placed on meal planning in American culture, she said.

"A common problem is that it gets to be 6 p.m., and Mom looks at Dad, and Dad's looking at the kids, and everyone is wondering what to eat that night," Kennedy said. If the solution is to drop by the fast-food restaurant around the corner, it becomes a habit and routine, she said. "You'll do it until you make an active decision that you won't do it as often." Instead, families should plan out their meals at the beginning of the week so that they can cook and eat together, if possible.

But as much as stress and lack of time account for some kids' poor eating habits, parents' submissiveness — the situations in which they allow kids to get their way, even with food — is also a big factor, Kennedy said. [7 Diet Tricks That Really Work ]

To optimize healthy eating habits among kids, it's important the same food rules apply both at home and at school, Kennedy said. A parent can feed a child as much healthy food as he or he wants at home, but if the child is eating junk food for lunch at school, those efforts are wasted, she said.

A new study, presented this month at a meeting of the American Heart Association, showed that school interventions during sixth grade helped to keep kids' cholesterol and resting heart rate down four years later.

The intervention included teaching kids to eat more fruits and vegetables and less fatty foods, to choose less sugary beverages, to exercise at least 150 minutes a week and to spend less time in front of the television and computer.

Researchers picked middle-school students for the study, because that is the age when kids start to make their own choices in terms of their activities or what they are eating, said study researcher Dr. Elizabeth A. Jackson, assistant professor of internal medicine at the University of Michigan.

"It's a great time to give them some independence in a healthy way instead of a negative way," Jackson told MyHealthNewsDaily.

Eating healthfully can be hard especially in lower-income neighborhoods where there aren't as many healthy food options or extracurricular physical activities offered at schools, she said.

"It's really a multilevel kind of environmental type phenomenon that pushes kids toward more sedentary behavior and more poor food choices," she said.

Pass it on: Parents generally feed kids junk food because of lack of meal planning, convenience and sometimes submissiveness to their children.