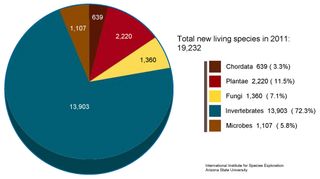 Invertebrates account for nearly 75 percent of the 19,232 species newly known to science, according to the 2011 State of Observed Species report.
(Image: © International Institute for Species Exploration | Arizona State University)

An annual inventory of newly discovered species lists more than 19,000 –  half of them insects. A total of 9,738 insect species were first identified in 2009, the most recent year of data compilation. And that's not even counting spiders.

The 2011 State of Observed Species report, released Jan. 18 by the International Institute for Species Exploration at Arizona State University, categorized 19,232 species that became known to science during the 2009 calendar year.

"As the number of species increases, so, too, does our understanding of the biosphere," said Arizona State entomologist Quentin Wheeler, a founding director of the institute. The report, the institute's fourth, showed a 5.6 percent increase from the previous year in the number of newly discovered species.

Forty-one of the listed species were mammals, and seven were birds. There were also 1,360 newly identified species of fungi and 1,107 new microbes.

In fact, the number of new living species discovered in 2009 was about twice as many as were known in the lifetime of Carolus Linnaeus, the Swedish botanist who initiated the modern system of plant and animal classification more than 250 years ago.

"The cumulative knowledge of species since 1758, when Linnaeus was alive, is nearly 2 million, but much remains to be done," Wheeler said. "A reasonable guess is that 10 million additional plant and animal species await discovery by scientists and amateur species explorers."

The report notes there is a growing need for improved approaches regarding species exploration and the recognition of new species. An "obvious lesson" learned during the compilation of the report's data was that the registration of all the aspects that contribute to the identification and naming of a new species, including its description, must be mandatory going forward, Wheeler said.

"In the animal world, it takes about two years to mine the international literature for evidence of newly named species," Wheeler explained. "The current lack of registration requirements simply compounds the problem of an already massive backlog."

"It is through knowledge of the unique attributes of species that we illuminate the origin and evolutionary history of life on our planet," Wheeler said. "As we find out where species live and how they interact, we increase our ability to understand the function of ecosystems and make effective, fact-based decisions regarding conservation."

In addition to the new report, the species institute is releasing a Retro State of Observed Species report, which reviews species discovered from 2000 to 2009. The Retro SOS shows that 176,311 species were discovered during that period.