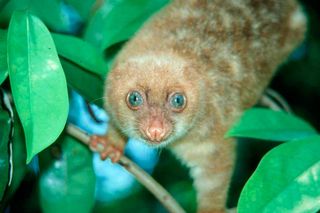 More than 1,000 new species have been discovered in New Guinea in a 10-year span, according to a new report from conservation organization WWF.

Among the 1,060 species uncovered between 1998 and 2008 are 12 mammals, including a giant, wooly rat that lives inside a volcano and a snub-fin dolphin with a face like the Kool-Aid man.

New Guinea is the world's second-largest island, smaller than Greenland but larger than Borneo and Madagascar, and is split between two countries: Papua New Guinea to the east and Indonesia to the west. It houses the third-largest tract of uninterrupted rainforest on Earth, after the Amazon and Congo.

These forests, along with New Guinea's surrounding reefs, are home to an estimated 6 to 8 percent of the species on Earth. More than two-thirds of them are found nowhere else. In addition, the tropical island is home to some of the most extreme members of the animal kingdom, including the world's only poisonous birds, the world's largest butterfly — Queen Alexandra's birdwing, with a wingspan up to 12 inches (31 centimeters) across — and the world's largest egg-laying mammal, the eastern long-beaked echidna, which can weigh up to 20 pounds (9 kilograms).

"If you look at New Guinea in terms of biological diversity, it is much more like a continent than an island," said Neil Stronach, WWF Western Melanesia’s program representative.

"Scientists found an average of two new species each week from 1998 to 2008 — nearly unheard of in this day and age," Stronach said.

The announcement comes just months after WWF announced discoveries of a similar  scale in the Amazon and on the island of Madagascar, biological hotspots that are home to an astonishing number of newly-discovered species, yet are facing serious threats.

In a similar vein, WWF warns that New Guinea's exotic parade of species is in danger.

Roughly 15 percent of the island's forests were cleared between 1972 and 2002, according to the WWF report, largely driven by logging and subsistence agriculture.