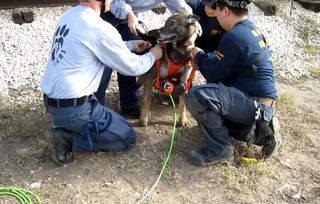 A FEMA dog is outfitted with a harness to carry a snake robot during disaster response training.
(Image: © Carnegie Mellon University)

The German shepherd had sniffed his way through a 60-foot tunnel to reach the person trapped inside. He barked furiously to signal his human handlers — and a coiled robot snake dropped from his belly to the ground next to the victim.

The demonstration showed how man's best friend might team up with search and rescue robots at the training grounds of Texas A&M University's "Disaster City" last fall. The dog's keen sense of smell and swift-footed approach combines with the robot snake's camera and slinky exploration capabilities to give human rescuers a close-up look at the scene.

"I don't see one replacing the other," said Alex Ferworn, director of the Network-Centric Applied Research Team Lab at Ryerson University in Canada. "I see dogs and robots as complementary."

The Canadian lab made a patented harness that allows dogs to deliver items inside bags slung under their bellies. But when human handlers had to push a button that would release the bag of emergency supplies, they couldn't see where the bag would drop.

Some brainstorming led to a new tactic — allowing the dogs to activate the emergency supply drop by simply barking.

"We added a feature called bark detection that lets the dog decide when to drop it off," Ferworn told InnovationNewsDaily. "We discovered that the dog is usually smarter than us, so we can get the bag to drop within a foot of the target if we let the dog do it."

Ferworn and his colleagues also created a robot named DEX that could drop from a dog's belly and explore its surroundings. They brought the robot and their device to the 2011 Response Robot Evaluation Exercise held by the Department of Homeland Security and National Institute of Standards and Technology last November.

At first, the snake robot's long power tether threatened to get tangled in the dog's legs. But firemen showed the researchers how to coil up the robot's tether so that it played out safely behind a running dog.

A German shepherd dog named "Freitag" ("Friday" in German) was volunteered by the Federal Emergency Management Agency (FEMA) for the honor of carrying the snake robot. Freitag had been trained (in German) to find victims sitting or lying on the ground — all for the reward of some playtime with his human trainers.

The dog first ran a practice trial outside a "bark barrel" with a human inside. It went on to successfully locate a human "victim" inside a 60-foot-long tunnel and deploy his robot bundle, as seen in a recent video released by Carnegie Mellon University.

Ferworn has already talked with Howie Choset, head of the Carnegie Mellon Robotics Institute, about how to improve the next robot-carrying system. He also has European colleagues discussing a new project focused on the unique combination of dogs and robots.

"Some investigators have been flippant about prematurely predicting the demise of the use of the dog in this situation," Ferworn said. "But the reason task forces use dogs is that they work — robots don't work for the same thing."

Perhaps the biggest problem right now is finding funding. Roboticists have struggled to fund search and rescue work, even as millions of dollars go toward the U.S. military's drones or the legions of robot factory workers around the world.

"Everything else is getting funded because there's profit involved," Ferworn said. "But when something goes bad, you'll need these [search and rescue] systems."