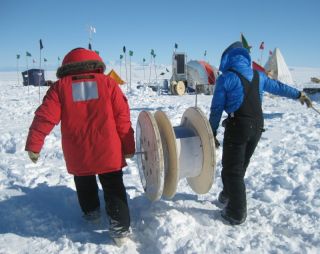 Scientists carry a spool of fiber-optic cable headed for duty inside and underneath the Ross Ice Shelf in Antarctica.
(Image: © David Holland.)

A small team of scientists recently installed a fiber-optic cable in the Ross Ice Shelf, a colossal plain of floating ice larger than the state of California that clings to the edge of Antarctica, straddling a massive bay between the eastern and western halves of the continent.

The fiber-optic cable is "like the kind that goes to your television or computer," said project leader David Holland, a professor at New York University, and was set in place so that the giant ice plain can, in essence, make phone calls to his office in Manhattan, and tell him what things are like in the ocean underneath it.

Holland and three colleagues — an NYU graduate student and researchers from Ohio State University and the University of Nevada — spent two weeks living out on the ice, sleeping in tiny tents to complete the pilot project, which is a year-long test run for the technology. [Harshest Environments on Earth]

"You can measure the temperature on a fiber-optic cable at every meter," Holland told OurAmazingPlanet. "With this technology you can 'watch' the ice shelf," he said.

It took three days of drilling to bore a tiny hole just 2 inches (3 centimeters) across into the ice to complete the installation, which was sponsored by the National Science Foundation.

A nifty suite of instruments sits atop the ice shelf, connected to the fiber-optic cable — a data logger, a low-power laser and a modem — powered by solar panels, wind turbines and batteries to get through the dark winter months, Holland said.

Every three hours, a modem on the roof of Holland's NYU building calls up the modem parked on the Antarctic ice to get a full rundown of temperatures throughout the ice shelf and, far more important, the ocean below.

So who wants to talk to a chatty ice shelf about its watery nether regions? Just about anyone who studies the mechanisms driving the significant changes observed in Antarctic ice. Research has revealed that warm ocean water gnawing away at ice shelves is a key player in unprecedented losses to the West Antarctic Ice Sheet over the last two decades.

Ice shelves act as door stops for glaciers — which are, essentially, slow-moving rivers of ice  — and slow glaciers' inexorable march into the sea. When ice shelves thin, or completely disappear, glaciers speed up. [Stunning Photos of Antarctic Ice]"The temperature of the water underneath the ice shelves and the rate that water circulates in the ocean cavities underneath the ice shelves are the major determinants of the mass balance at the bottom of the ice shelves — in other words, how fast they're melting at the bottom," said Stan Jacobs, an oceanographer at Columbia University's Lamont-Doherty Earth Observatory.

"That moves more ice more rapidly into the ocean, and of course that has sea-level implications," Jacobs told OurAmazingPlanet.

Satellites have glimpsed changes in ice shelves, and even their disappearance — the dramatic collapse of the Larsen B ice shelfon the Antarctic Peninsula made headlines in 2002 — yet they can't see underneath them to capture the details concerning how warm ocean water is taking a toll.

Holland said the fiber-optic cable can operate for many years at a time, delivering a steady stream of data on temperature conditions in the ocean under the ice shelf.

Jacobs, who was not associated with the project, said that getting temperature data during the winter months, when the darkness and brutal conditions make field work impossible, would be valuable.

Holland said that so far, the data indicate things are pretty stable under the Ross Ice Shelf, which is precisely what he expected. Unlike its neighbors in western Antarctica, the ice shelf doesn't appear to be suffering any losses.

"This was not necessarily the most important place to go," Holland said, "but it's a smart idea for testing the technology." The ice shelf is next door to McMurdo Station, the largest of the United States' three research stations in Antarctica.

"If it works for one year, it will be a proven technology — and if it's good I would ask that it be installed elsewhere," Holland said.

Jacobs said that ice shelves in the Amundsen Sea, particularly the Pine Island Glacier Ice Shelf, are of most concern to scientists, because they appear to be melting rapidly.

The glaciers in this western region of Antarctica are responsible for about 7 percent of annual global sea level rise, and of those speedy glaciers, the Pine Island Glacier is moving the fastest, at a clip of about 2.5 miles (4 km) per year.

A team of scientists is currently camping out on the Pine Island Glacier ice shelf to get some of the first precise measurements of temperature beneath it, yet they will have to pack up and go home when Antarctic winter approaches.

Although drilling into a giant piece of ice clinging to a continent at the bottom of the world may appear frivolous to some, Holland said, the research is important.

"If you talk to one individual, they're working on some piece of the puzzle around the change," he said. "No one piece is more important than the other, but if one piece is ignored you can't figure out this story."