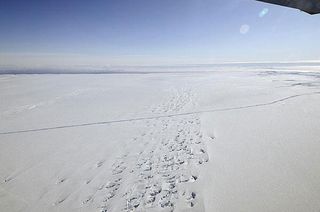 A huge, emerging crack has been discovered in one of Antarctica's glaciers, with a NASA plane mission providing the first-ever detailed airborne measurements of a major iceberg breakup in progress.

NASA's Operation Ice Bridge, the largest airborne survey of Earth's polar ice ever flown, is in the midst of its third field campaign from Punta Arenas, Chile. The six-year mission will yield an unprecedented three-dimensional view of Arctic and Antarctic ice sheets, ice shelves and sea ice. The glaciers of the Antarctic, and Greenland, Ice Sheets, commonly birth icebergs that break off from the main ice streams where they flow in to the sea, a process called calving.

The crack was found in Pine Island Glacier , which last calved a significant iceberg in 2001; some scientists have speculated recently that it was primed to calve again. But until an Oct. 14 IceBridge flight, no one had seen any evidence of the ice shelf beginning to break apart. Since then, a more detailed look back at satellite imagery seems to show the first signs of the crack in early October.

"We are actually now witnessing how it happens and it's very exciting for us," said IceBridge project scientist Michael Studinger of NASA's Goddard Space Flight Center in Greenbelt, Md. "It's part of a natural process, but it's pretty exciting to be here and actually observe it while it happens."

Gravity pulls the ice in the glacier westward along Antarctica's Hudson Mountains toward the Amundsen Sea. A floating tongue of ice reaches out 30 miles (48 kilometers) into the Amundsen beyond the grounding line, the below-sea-level point where the ice shelf locks onto the continental bedrock. As ice pushes toward the sea from the interior, inevitably the ice shelf will crack and send a large iceberg free. [Photo Album: Antarctica, Iceberg Maker]

Pine Island Glacier is of particular interest to scientists because it is big and unstable and so is one of the largest sources of uncertainty in global sea level rise projections.

A primary goal of Operation IceBridge is to put the same instruments over the exact same flight lines and satellite tracks, year after year, to gather meaningful and accurate data of how ice sheets and glaciers are changing over time. But discovering a developing rift in one of the most significant science targets in the world of glaciology offered a brief change in agenda for the Oct. 26 flight, if only for a 30-minute diversion from the day's prescribed flight lines.

The IceBridge team observed the rift running across the ice shelf for about 18 miles (29 km), using an instrument called the Airborne Topographic Mapper, which uses a technology called lidar (light detection and ranging) that sends out a laser beam that bounces off a surface and back to the device. The lidar instrument measured the rift's shoulders about 820 feet (250 meters) apart at its widest, although the rift stretched about 260 feet (79 meters) wide along most of the crack. The deepest points from the ice shelf surface ranged from 165 to 195 feet (50 to 60 meters).

When the iceberg breaks free, it will cover about 340 square miles (880 square kilometers) of surface area. Radar measurements suggested the ice shelf in the region of the rift is about 1,640 feet (500 meters) feet thick, with only about 160 feet of the shelf floating above water and the rest submerged.

It is likely that once the iceberg floats away, the leading edge of the ice shelf will have receded farther than at any time since its location was first recorded in the 1940s.