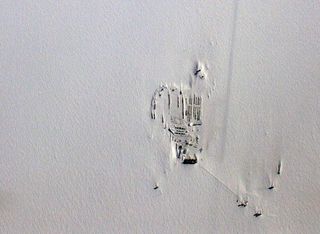 The South Pole Station was easily visible during a flight there on Nov. 4.
(Image: © Digital Mapping System (DMS) group)

The most recent flight of NASA's IceBridge mission was almost waylaid once again by unfavorable weather, but the clouds cleared and mission scientists were able to send their instrument-laden DC-8 plane on a path around the South Pole.

The flight followed the arc of the 86 degrees south latitude line, tracing the same path as a previous mission in 2009.

IceBridge is a six-year campaign to survey and monitor areas of Earth's polar ice sheets, glaciers and sea ice and how they are responding to climate change.

The 12-hour mission conducted last week allowed NASA's Land, Vegetation and Ice Sensor (LVIS) equipment to map the surface of the ice sheets deeper into the Antarctic continent . The mission also tested whether NASA's airborne topographic mapper and Kansas University's MCoRDS radar could be effective at higher altitudes than they normally operate.

LVIS takes measurements of surface height using a laser altimeter. A laser pulse is transmitted from the instrument and reflected back from the surface where the return pulse is recorded. Using those readings, scientists can calculate the height of the ice below.

The goal of this particular flight was to compare LVIS findings and measurements from NASA's ICESat (Ice Cloud and land Elevation Satellite) satellite. In addition, the LVIS observations will enable researchers to monitor long-term interior ice sheet change for current and future near-polar satellite mission data.

After some trouble with a buildup of frost on the window of the LVIS laser, the flight elevation was lowered and researchers were able to continue their survey, eventually surveying 90 percent of their intended path.

At the end of this flight, the DC-8 flew over the Amundsen-Scott South Pole Station in order to use the GPS data that is being collected there for their trajectory computations.