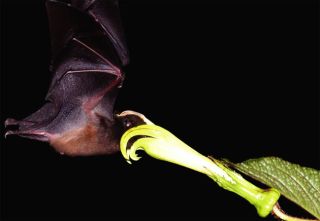 Only the tube-lipped nectar bat can reach the nectar of this bell-shaped flower (Centropogon nigricans) due to its long flower tube.
(Image: © Nathan Muchhala)

Nectar-feeding bats burn sugar faster than top-class athletes, making them the fastest sugar-metabolizing mammals on Earth, according to a new study.

Within minutes of stopping for a flower-power drink, these tiny mammals—typically found in South and Central America—start to metabolize the nectar.

“To keep airborne is the most costly activity,” said study co-author Christian Voigt of the Leibniz Institute for Zoo and Wildlife Research in Germany. “It is a dilemma they have to fly to forage for nectar, and they spend most of the energy from nectar with flying.”

The study was published online today in the journal Functional Ecology.

Voigt and study co-author John Speakman of the University of Aberdeen in the United Kingdom fed a dozen captive bats sugar with carbon-13 and measured how much carbon-13 the bats exhaled. Carbon-13 is a non-radioactive isotope of carbon that allowed researchers track the sugar.

Nectar-feeding bats rely on the small amounts of flower nectar—containing simple sugars such as sucrose and glucose—available to get around. These sugars are quickly metabolized, giving bats a sudden burst of energy needed for them to hover like hummingbirds, a type of flight that requires abundant energy.

“They can fuel their metabolism also on fat or glycogen at night, but then they run out of energy for the day,” Voigt told LiveScience. “Therefore, nectar-feeding bats are active throughout the whole night, visiting hundreds of flowers per night and covering large distances of several kilometers.”

In most animals, a large amount of the food consumed is converted into storage. When animals need fuel for metabolism, they draw from this source.

“Small nectar-feeding bats have among the highest metabolic costs among mammals, and mostly eat a diet low in fat and protein but rich in sugars,” the authors noted. “Metabolizing these sugars immediately [when] they are consumed, saves the costs of converting them to and from storage.”