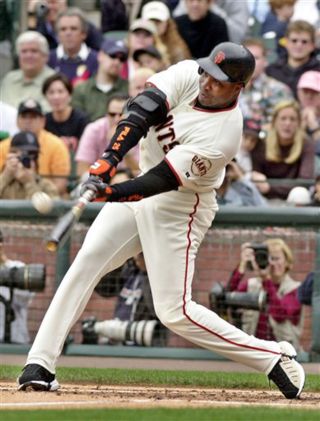 Barry Bonds has his eyes on home-run history, but exactly why some pros excel at keeping their eyes on the ball has remained a baseball marvel until now.

Deciphering curveballs from fastballs and balls from strikes requires that a player's eyes precisely lock onto the ball, as described in recently published research on humans' ability to track balls and other moving objects.

"Our results show that individuals vary tremendously in this ability to lock their eyes onto a moving object, called smooth pursuit, and that this variation relates strongly to a specific type of motion perception ability, so-called high-level motion perception," said study co-author and University of Pennsylvania cognitive psychologist Jeremy Wilmer.

Humans use two skills to see bodies in motion. First, our eyes first need to catch up to a moving object, a skill called low-level motion perception, when we sense something fluttering before we can recognize exactly what it is. Next, high-level motion perception occurs, at which point our eyes lock on, identify and examine the object.

Wilmer and his colleagues conducted two tests on the low- and high-level motion perception abilities of 45 participants. In one test, study participants were unable to move their eyes and had to describe the speed at which they saw objects zooming by. The second test tracked the movement of people's eyes and measured their ability to follow moving objects.

Some volunteers excelled at low-level motion perception and easily caught up to a moving object with their eyes—they perceived motion more quickly out of the starting block. Meanwhile, a different group of volunteers exhibited more skill at high-level motion perception and were better at locking onto a moving target once their eyes caught up to it (smooth pursuit).

Batters with a heightened ability at high-level perception may have eyes better skilled at locking onto and smoothly pursuing a pitch, and could especially have an advantage in analyzing a baseball's spin during the first third of a ball's trajectory, says Wilmer.

Wilmer's results, detailed in a recent issue of the journal Neuron, suggest that training focused on high-level motion perception could possibly improve a player's ability to lock onto and analyze an oncoming pitch.

However, he says, it's not yet known whether the trait runs in families and whether "particular genes contribute to making one a smooth pursuit expert."

Of course, locking onto moving objects is important for others besides ball players. The skill also comes in handy in complicated social situations.

Say you're walking down the street as someone approaches. You want to be able to lock onto their face to tell if they're looking at you and determine what kinds of emotions they may be expressing.

If they're angry, you'd probably want to get out of their way.

"I think there's a great assumption that we see the same thing," Wilmer told LiveScience. But from his research, "it's not surprising that people have such big differences in abilities as evident in baseball and social function."