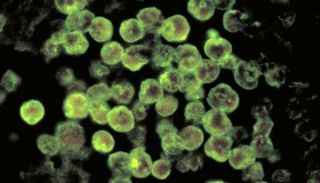 A man in North Carolina died from a rare "brain-eating" amoeba infection after swimming in a lake at a local water park, according to news reports.

The 59-year-old man became ill after visiting Fantasy Lake Water Park, a man-made lake in Cumberland County, on July 12, according to The New York Times.

The man tested positive for Naegleria fowleri, a single-celled organism that's naturally found in warm freshwater, such as lakes and rivers, the North Carolina Department of Health and Human Services (NCDHH) said in a statement. In the U.S., most infections occur in southern states, particularly during the summer months after it has been hot for prolonged periods, which raises the water temperature, NCDHH said. [5 Key Facts About Brain-Eating Amoeba]

Swallowing Naegleria fowleri in water will not cause an infection. But if water containing this amoeba goes up the nose, the organism can enter the brain and be fatal — the amoeba destroys brain tissue, which results in brain swelling and usually death, according to the Centers for Disease Control and Prevention (CDC).

Still, infections are extremely rare. From 1962 to 2018, there were just 145 cases of Naegleria fowleri reported in the U.S., according to NCDHH. But the illness has a high fatality rate — of the 145 cases, just 4 people survived.

"Our sympathies are with the family and loved ones," epidemiologist Dr. Zack Moore said in the statement. "People should be aware that this organism is present in warm freshwater lakes, rivers and hot springs across North Carolina, so be mindful as you swim or enjoy water sports."

There is no rapid test for Naegleria fowleri in water — identifying the organism can take weeks, according to the CDC. This means that people who go swimming in warm freshwater should assume that there is a low risk of infection, the CDC says.

In 2016, an 18-year-old woman from Ohio died from Naegleria fowleri after going white-water rafting at an outdoor recreation center in North Carolina.