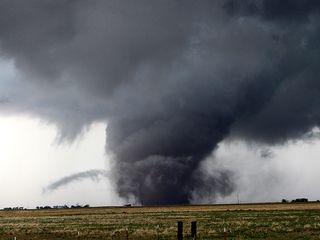 The tornado touched down in Tipton, Okla., earlier this week and was upgraded yesterday (Nov. 10) to an EF-4, the second-highest rating on the Enhanced Fujita Tornado damage scale, after a storm survey team analyzed its destruction.

"We've had some biggies come through from time to time, but never an EF-4 in November," said Gary McManus, of the Oklahoma Climatological Survey, which operates the Mesonet weather data collection towers across the state. One of the 30-foot-tall (10 meters) weather collection towers was toppled by the EF-4 tornado.

The massive fall twister demolished an Oklahoma State University extension office, according to the storm survey report from the National Weather Service (NWS) in Norman, Okla. The tornado had estimated winds between 166 and 200 mph (267 kph to 322 kph), significantly stronger than its EF-2 preliminary rating.

The twister touched down on Nov. 7, one of six confirmed tornadoes spawned by a huge supercell storm across Texas and Oklahoma. The storm system initially produced many thunderstorms, heavy rainfall and flash flooding over parts of south central Oklahoma during the late evening of Nov. 6 and early morning of Nov. 7. Rainfall totals up to 9 inches (23 centimeters) were reported across parts of two counties. The rain did alleviate the extreme drought conditions in some parts of the state, according to The Weather Channel.

The system then generated severe weather, including tornadoes, large hail, damaging winds and flooding from the early afternoon of Nov. 7 through the early morning of Nov. 8.

Strength ratings for the other tornadoes have not been determined in part because they did not cause substantial damage, which is what researchers use to rate a tornado's strength, said Marc Austin of the NWS office in Norman. That's good news for people and property, but it shows one of the challenges in building accurate storm records.

The main tornado season runs from spring to early summer, but tornadoes can form under a variety of conditions and strike during fall and winter.

Tornadoes have killed 548 people so far in 2011, according to the Storm Prediction Center, making this one of the most active tornado years in U.S. history. A massive outbreak in April killed nearly 250 people in Alabama alone. One month later, another massive twister killed more than 150 in Joplin, Mo.