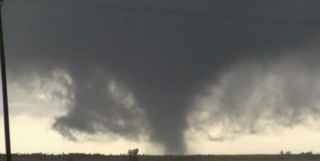 The second tornado season kicked off in Oklahoma this week.
(Image: © Basehunters/Tornadovideosdotnet/YouTube)

With more than two-dozen reported tornadoes across Oklahoma, Texas and Louisiana this week, the so-called "second tornado season" has touched down with a bang.

Tornadoes can strike virtually anywhere and anytime in the United States, and November is known as a particularly big month for twisters, especially in the Southeast area known as Dixie Alley. But this year, it's the traditional Tornado Alley that has taken the November punches.

At least six tornadoes were reported in Oklahoma Nov. 7, combined with baseball-size hail and wind gusts up to 92 mph (148 kph). One twister destroyed an Oklahoma State University extension office.

The main tornado season runs from spring to early summer, but tornadoes can form under a variety of conditions and strike during fall and winter. Tornadoes have killed 548 people so far in 2011, according to the Storm Prediction Center, making this one of the most active tornado years in U.S. history. A massive outbreak in April killed nearly 250 people in Alabama alone. One month later, another massive twister killed more than 150 in Joplin, Mo.

Last November, severe weather was slow to start, but this year the second tornado season is already in full swing.

While Dixie Alley has been mostly quiet, some scientists are starting to suspect that November is in fact the beginning of the Southeast's only tornado season.

"Sometimes you get started in November and you just keep going all the way to April and May," said meteorologist Steve Wilkinson of the National Weather Service office in Jackson, Miss.

During this time of the year, when the daylight hours are shorter, nighttime tornadoes, which can be particularly deadly, are a big risk. November has averaged four tornado-related fatalities per year since 1950, making it the deadliest tornado month of the late summer and fall, according to the Storm Prediction Center in Norman, Okla.

Fall and spring are both transitional periods, when masses of warm and cool air are more likely to collide and create the thunderstorms that spawn tornadoes.

Tornadoes form where warm moist air is trapped underneath a layer of cold, dry air. The strongest tornadoes often form when the wind about 10,000 feet (3,000 meters) above the ground blows in a different direction than the surface wind. In the spring, warm air rising in the storm system encounters this wind shear and is pushed into a horizontal motion, creating a strong rotation.

In the fall, wind shear returns across the United States as the route of the jet stream — a fast but narrow air current — bends much farther south, said Jim Stefkovich, a meteorologist with the NWS in Birmingham, Ala. And the Southeast isn't short on soupy air during this time of year.

"We always have the Gulf of Mexico close by for warm air," Stefkovich said.

November tornadoes usually strike most in Dixie Alley, which is southeast of the traditional Tornado Alley that spans the Central Plains. This is because moist air from the Gulf Coast can more easily reach these states, while it may be blocked from spreading elsewhere.

Weather watchers in the Gulf states are working hard to get the word out that severe weather is back.

Heads up, from now through spring

In Alabama, where tornadoes ravaged the state in the spring, November and early-December rank behind only April and May on the list of biggest tornado months, Stefkovich said. His office is getting the word out about November's history of severe weather.

"It's preached not only with local media here but also with us," Stefkovich said.

In Mississippi, the NWS held a statewide tornado drill in October and found more support from the public and business community than usual.

"Because of the major tornado outbreak, it's on their radar now," said Wilkinson, the NWS meteorologist in Jackson.

With severe weather on everyone's minds, some scientists are starting to investigate the late fall and winter twisters to see if November is actually the beginning of the Southeast's only tornado season instead of representing a fall anomaly. Last year, Mississippi had a tornado outbreak on New Year's Day.

"It implies that there's November and then some sort of safe period that picks up in April and May," said Grady Dixon, an atmospheric scientist at Mississippi State University. "I think that that's sort of misleading for the Southeast."