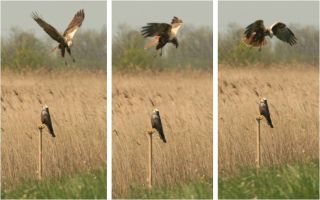 Birds of prey may be thought of as fierce foes, but scientists find that some males disguise themselves as peaceful females.

These males belong to a species of raptor known as the marsh harrier. Using plastic decoys, French researchers learned that the transvestites among these predators are less aggressive than other males.

Some animals will use the tactic known as sexual mimicry in the cutthroat battle to survive. For instance, young male birds often have female plumage that helps camouflage them; they will acquire more striking plumage only after reaching sexual maturity, to help them attract mates.

However, permanent lifelong female mimicry, in which males look like females throughout life, is extraordinarily rare in birds. Until now, it had been studied in only one species, the ruff (Philomachus pugnax), a shorebird in which some males engage in female behavior to sneakily get sex.

The only other bird in which this practice has been found is the marsh harrier (Circus aeruginosus). In one exceptional population in midwestern France, 40 percent of the males of this bird of prey  disguise themselves in female plumage.

The researchers then spent three months watching how both kinds of males responded to decoys placed in the wild near the nests of 36 breeding pairs of marsh harriers. Some funny situations arose during this field work.

"I observed a female-like male marsh harrier trying to copulate, for almost 10 minutes, with a female decoy," Audrey Sternalski, a behavioral ecologistat the Research Institute for Hunting Resources in Spain, told LiveScience. "Furthermore, as our study area is also a well-known site for naturalists and photographers, it has been really funny to observe some tourists or photographers believing that the decoy was a real marsh harrier and attempting to approach the decoy to photograph it." [In Photos: Birds of Prey]

The researchers found typical males were territorial creatures, often attacking decoys resembling other typical males. They were significantly less aggressive against decoys painted like a female or a female-like male, however. This suggests the transvestite males mimic females to avoid costly fights with typical males.

The researchers' experiments also revealed that female-like males were much less violent than their brethren, never attacking decoys resembling typical males. (Female marsh harriers rarely assaulted any decoy.) These transvestites might essentially have a "nonaggression" pact with other males, researchers said.

Getting close to the gals

Sternalski suggested transvestite marsh harriers might also use their feminine plumage to get intimately close to females, just as transvestite ruffs do. Although it is very hard to catch marsh harriers mating because they prefer to have sex in reed beds, future research could involve paternity tests of hatchlings to see if transvestite males did indeed get around.

Future studies also could endeavor to tease apart the relationships between plumage and behavior: Are transvestite males relatively peaceful because they are hormonally wired to be so, or do they learn such behavior by watching others?

"The main obstacle we foresee in future research resides in the species itself," Sternalski said. "The marsh harrier is a difficult species to work with because the species is quite sensitive to human disturbance, and adults are difficult to capture and manipulate."