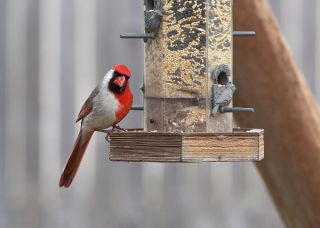 A strange bird showed up in Larry Ammann's backyard on Jan. 14. Clearly a cardinal, it had the bright red plumage of a male on its left side and gray, female feathers on its right.

"I had no clue how on Earth something like that could happen," said Ammann, a professor of statistics and a wildlife photographer who lives in a suburb of Dallas. "It was a learning experience."

Ammann and the biologists he consulted concluded the bird was most likely part female, part male. Creatures with this condition are called gynandromorphs. They are genetic anomalies: Some cells in their bodies carry the genetic instructions for a male, some for a female. While this "gender-bending" also occurs among insects, spiders and crustaceans, birds like this cardinal have raised questions about how sex identity is determined among some animals. [Gallery: Stunning She-Males of the Animal World]

As the breeding season began, other cardinals became more territorial, and the bird disappeared before it could be trapped and its feathers collected for genetic testing.

"The last view I got of it was two males chasing it away," Ammann said.

A question of hormones

In recent years, other dual-sex birds — a zebra finch and three funky chickens — have raised questions about how some animals develop male or female features.

For many animals, sex is determined by two chromosomes, called sex chromosomes. Among humans, for example, men have an X and a Y chromosome, while women have two Xs. Every cell in your body, except for sperm or egg cells, carries two sex chromosomes. But among mammals, like us, the Y chromosome carries a gene responsible for the development of testes, which release hormones that promote the development of male features. In women, the ovaries release different hormones that promote the traits we associate with being a female.

The hormones are key to sex identity in humans and other mammals. In fact the dominant hormones can overwrite an abnormality in the sex chromosomes — that is one reason we don't see gynandromorph humans. (Because of the influence of hormones, which diffuse throughout the body, one human can't end up with distinct male and female halves. A number of other rarities in sexual development can occur among humans, such as when external and internal sex organs don't match up or when someone possesses both male and female genitalia.)

Hormones were also assumed to be key to sex identity in other vertebrates, including birds. But studies of other birds with split identities  — a zebra finch, in 2003, and three chickens, in 2010 — indicated otherwise.

An analysis of a dual-sex zebra finch revealed that, in spite of being exposed to the same hormones, the male and female sides of the bird's brain were different, and these differences appeared to have arisen because of the sex chromosomes carried by the brain cells. (This research appeared in the journal Proceedings of the National Academy of Sciences on April 15, 2003.)

Hormones, or some other chemical signal, were not completely out of the picture, however.

Although this finch's body was split, its identity was male. The little bird sang a masculine song, courted and copulated with a female finch, and, not surprisingly, the two produced infertile eggs. The bird probably took on a masculine identity because of dominant male brain cells or male hormones, according to Arthur Arnold, a professor at the University of California, Los Angeles and one of the researchers.

A later study, of the three chickens, found that cells throughout the birds' bodies followed their own sets of development instructions, regardless of the hormones to which they were exposed.

In keeping with this divison, the female sides had typical brown feathers, small wattles and leg spurs, while their male sides had mainly white feathers, large wattles, leg spurs and bigger breast muscles. The researchers who analyzed the chickens also performed transplantation experiments and found that if genetically male cells were transplanted into a female embryo they retained their male identity and vice versa. (This research appeared in the journal Nature on March 11, 2010.)

Where they come from

It's not known exactly how gynandromorphy happens in birds, Arnold said. The predominant theory is that an error occurs in the formation of an egg, which normally carries one chromosome to unite with the single chromosome carried by the sperm. But if an egg accidentally ends up with two chromosomes — a Z and a W — and if this aberrant egg is fertilized by two Z-carrying sperm, the bird that results will have some ZZ cells and some ZW cells, he explained.

Insect and crustacean gynandromorphs, meanwhile, can arise by a different process, in which the sex chromosomes fail to separate properly during a cell division early on in development.